StoreDot, the developer of extreme fast charging (XFC) battery technology for electric vehicles, reports being the first company to test silicon-dominant cells for more than 1000 cycles. Using a specially designed testing form factor, StoreDot has now achieved 1250 cycles with cells that are taken to 80% of charge in 15 minutes and then discharged for one hour. 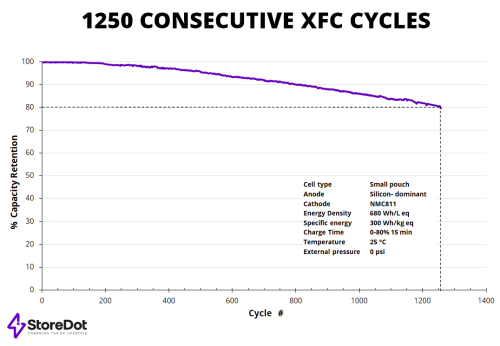 These results were achieved with cell high energy density of 300 Wh/kg and 680 Wh/l under real-world conditions at room temperature and with no additional pressure applied.

The company is now beginning to advance to B-samples, using larger form factors, to ship to global automotive manufacturers later this year for testing in future electric vehicles.

I’m hugely proud of our recent achievement. 1200 consecutive cycles of extreme fast charging is a critical milestone that would have been unimaginable just two years ago. This is not only testament to the skill and dedication of StoreDot’s world-leading team, but it reaffirms our roadmap of delivering ‘100in5’ cells for global automotive manufacturers within two years, and creating batteries that will transform the experience of electric vehicle drivers by eradicating their charging and range anxieties.

Lithium-ion battery capacity degrades as the number of cycles—a single charge and discharge—increases. An industry standard of cycles to 80% capacity is often used as a benchmark; creating cells that can charge for 1200 cycles while maintaining the industry standard is a significant achievement.

StoreDot’s target is to deliver 100 miles of range after just two minutes of charge within a decade.

StoreDot’s extreme fast charging cells will be available in both pouch and the 4680 family form factor.

When the batteries degrade below 80% of their initial capacity can the car still be useful ? It would seem that an electric car whose range has degraded from say 350 km to even 250 km, would still be very useful as a commuter or similar apps.

Paroway, the graph says 0-80%, so from 0%
Calgarygary, i usually charge my EV, as is a good best practice, to 80-90% anyway, so yeah, 80% capacity would still be usefull. And otherwise, as a stationary storage battery it'll be usefull for another 25 years.