City of York (UK) Council has been awarded more than £8.4 million (US$11 million) by the UK’s Department for Transport to support the purchase of 44 fully electric buses.

The council submitted the multi-million pound bid to the Government’s Zero Emission Bus Regional Area (ZEBRA) scheme to further support the roll-out of zero-emission buses in York, where 33 electric buses already operate on the city’s Park and Ride service. 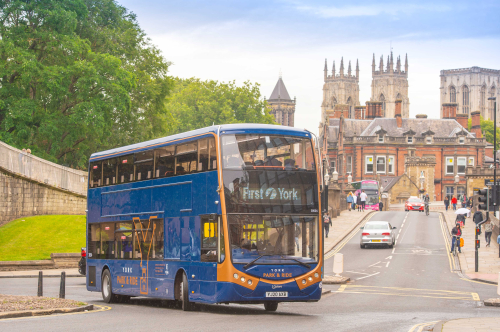 The ZEBRA bid also brings significant investment in York from FirstGroup, with First pledging £10 million towards the new buses, alongside the DfT’s £8 million.

The new buses will be used on First’s routes 1, 4, 5, 6, the Hospital Shuttle Bus and Park and Ride route 2. After the fleet is delivered, York will have 77 electric buses in service, operating more than half the mileage in the city. This will reduce carbon emissions in York by 2,300 tonnes per year as well as reducing NOx and particulate emissions across the city, but especially within the city center Clean Air Zone.

In October last year, City of York Council also submitted a £39-million (US$51.4 million) bid to the DfT setting out how the city will bring forward measures to make bus services faster and more reliable, upgrade the Park and Ride network and reform fares. A funding decision on this is expected soon.

The number of passengers on York’s bus service is also recovering well following the covid lockdowns, with passenger volumes currently 80-90% of pre-pandemic levels.