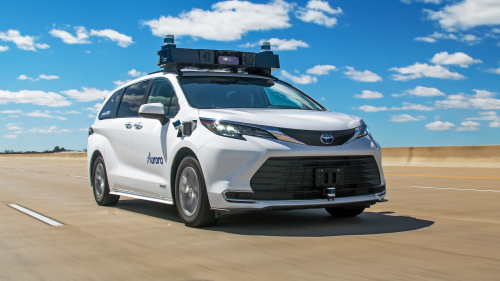 Aurora has worked with Toyota Motor North America’s (Toyota) engineering team over the last year to establish and refine requirements to prepare this vehicle model platform to integrate with the Aurora Driver. Since unveiling its prototype last fall, Aurora has further refined the Aurora Driver hardware while Toyota built a larger fleet of platform vehicles at its facilities, customized for the requirements of its customers, including Aurora.

Aurora is autonomously testing the fleet on highways and suburban streets in Texas, where the Aurora Driver regularly handles Texas U-turns, high-speed merges, and lane changes, including those in response to vehicles on the shoulder.

The Aurora Driver is also able to react to various forms of construction, stop-and-go traffic, inclement weather, and can detect pedestrians, motorcyclists, traffic lights, and more.

Toyota executives were invited to be the first to experience the Aurora Driver in the Toyota S-AM. The riders were picked up at Toyota’s Headquarters and then driven autonomously on a portion of the route that would normally be taken to the Dallas Fort Worth International Airport. The route showcases Aurora’s ability to safely operate at highway speeds, a key technical differentiator that allows it to prioritize popular and lucrative rides, such as trips to the airport, when it launches Aurora Connect.

Aurora’s investment in a Common Core of Technology allowed this fleet to inherit all of the learnings and capabilities of Aurora’s next-generation trucks. In fact, the fleet of modified Toyota Sienna vehicles achieved parity with Aurora’s trucks within just six weeks of commencing on-road testing. Aurora plans to continue adding vehicles to the fleet and testing in the Dallas-Fort Worth area in preparation for commercial launch.