Lithium-sulfur batteries are prospects for future batteries as they are made from cheaper and more environmentally friendly materials than lithium-ion batteries. They also have higher energy storage capacity and work well at much lower temperatures. However, they suffer from short lifetimes and energy loss.

A research group from Uppsala University has now identified the processes that are limiting the performance of the sulfur electrodes that in turn reduces the current that can be delivered. A paper on their work is published in the journal Chem. 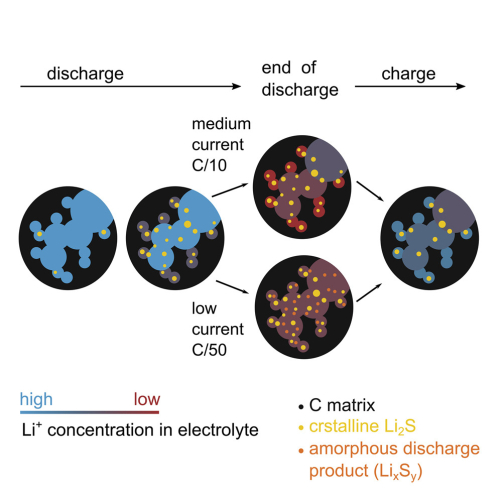 Various different materials are formed during the discharge/charge cycles and these cause various problems. Often a localized shortage of lithium causes a bottleneck.

The study combined various radiation scattering techniques: X-ray analyses were made in Uppsala, Sweden and neutron results came from a large research facility, the Institut Laue Langevin, in Grenoble, France.

A comprehensive description of electrochemical processes in the positive electrode of lithium-sulfur batteries is crucial for the utilization of active material. However, the discharge mechanisms are complicated due to various reactions in multiple phases and the tortuosity of the highly porous carbon matrix.

In this work, simultaneous measurements of small-angle and wide-angle scattering and cell resistance are performed on operating lithium-sulfur cells. Results indicate that precipitates grow mostly in number, not in size, and that the structure of the carbon matrix is not affected. The comparison of the small-angle and wide-angle scattering reveals the amorphous discharge products found at a low discharge rate.

Further analysis demonstrates the correlation between the diffusion resistance and the compositional change of electrolyte in the mesopores at the end of discharge, which suggests that Li-ion deficiency is the limiting factor for sulfur utilization at a medium discharge rate.

The study was carried-out as part of a co-operation with Scania CV AB.

How about a NaS battery instead?