Under normal operation, each electrode carries a small current which results in negligible energy loss. In the event of an internal short, BrakeFlow regulates current flux from other areas of the battery to the short, thus limiting the short area from overheating and inhibiting thermal runaway 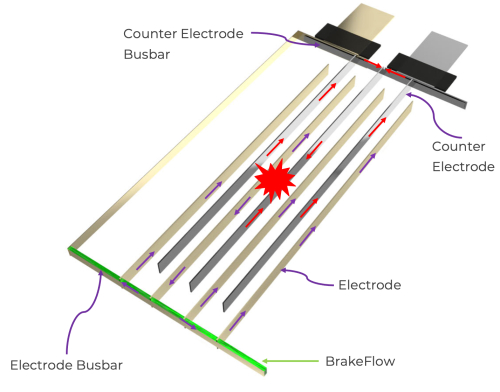 When we founded Enovix in 2007, our approach to improving cell performance was unique from other advanced battery technology companies. Solving a big problem differently than others is inherently challenging and creates unique issues. At the same time, it avoids problems others face and enables new opportunities others can’t exploit or even imagine. Today’s announcement is a momentous day for Enovix. It’s a great example of how taking a different approach can lead to game-changing technology.

We believe our battery architecture is one of the most significant advancements in Li-ion battery design in decades. Not only does our architecture enable a 100 percent active silicon anode, which notably increases energy density, but also enables us to launch new innovations like BrakeFlow, which by design, reduces the temperature rise at a short location, adding exceptional tolerance against thermal runaway.

BrakeFlow technology will become part of the company’s automatic tooling and production set at its Fremont factory, Fab-1. The company anticipates BrakeFlow will be available in its battery cells in 2023.