In an effort to address the rapidly increasing cost of gasoline, President Biden authorized the release of 1 million barrels of oil per day for the next six months—more than 180 million barrels—from the Strategic Petroleum Reserve (SPR). The Biden Administration had earlier in March authorized a drawdown of 30 million barrels in coordination with the IEA in response to Russia’s invasion of Ukraine. 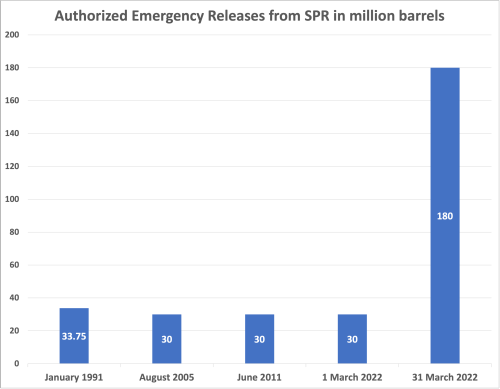 The SPR is a US Government complex of four sites with deep underground storage caverns created in salt domes along the Texas and Louisiana Gulf Coasts. The newly authorized drawdown will come from all four storage sites. Current authorized storage capacity is 714 million barrels, however the SPR currently holds 568.3 million barrels—its lowest since May 2002—according to the US Energy Information Administration (EIA).

The US and other member states of the International Energy Agency (IA) agreed earlier in March to release 60 million barrels of oil reserves to compensate for supply disruptions following Russia’s invasion of Ukraine, with the US supplying 30 million.

Biden called the latest release a “wartime bridge” to increase oil supply until domestic production ramps up later this year. The release is by far the largest yet from the national reserves.

Biden said that his administration would restock the reserve when prices are lower.

Background. The SPR was established in the 1970s to alleviate the effects of unexpected oil supply reductions. The primary rationale for the SPR is for it to serve as an emergency response tool the President can use should the United States be confronted with an economically-threatening disruption in oil supplies.

There have been four prior emergency drawdowns in the history of the SPR:

Test sales are relatively rare: the most recent test sale occurred in 2014. The SPR has released crude oil under exchange agreements 13 times since 1996, most recently after Hurricane Ida in September 2021. In these exchange agreements, crude oil is released to private companies and repaid in kind with additional barrels by specified dates, similar to monetary interest on a loan.

Greedy oil companies look for reasons to jack up prices; The middle east holding down production at the same time that nations are refusing to buy Russian oil is a built-in reason...flooding the market with U.S. oil will make the U.S. oil companies very happy; however, it's a temporary fix for drivers. The real fix is to quit using oil and gas where possible by drivings EVs and installing geothermal, wind and solar energy ASAP.
Using renewable clean energy makes energy pricing a local process and the oil companies can no longer hold drivers hostage to jacked up prices. And, energy is no longer a reason to start Wars!

The previous post shows just how ignorant some people are.
WHERE does Lad thing electricity comes from? EVERY TIME he plugs in his EV about 2/3rds of the electricity that charges his battery comes from... you guessed it... FOSSIL FUEL. Yeah. COAL, OIL, NATURAL GAS, PROPANE... and about 10% comes from NUCLEAR which is NOT SAFE and will some day kill MILLIONS because some missile hits it. They can have all the safe guards they want ---- but JUSY ONE MISSILE can override them all.
Putin is a GREEDY SOCIALIST and I'm STILL WAITING for the socialist environmentalists to start complaining about Putin's environmental damage and pollution.

@ Louis Gander:
To err is human, to shut up is divine. I'm sure that you haven't got the slightest clue as to what socialism means. Putin is by no way a socialist rather a stupid, ignorant and careless authoritarian (dictator).
His case is already pending by the International Department of Justice where he has been charged for war crimes and mass murder. His only hope is that he doesn't live long enough to participate in his trial. Once they get a hold of him, even if he doesn't get a death sentence, he'll spend the rest of his miserable life in solitary confinement.
He'll get a cell right next to Milosevic.

The solution with gasoline is to nuy a small car like mine a hyundai accent 6 speed and wait for hydrogen. All the others solutions are just noise.

EV's are reaching price parity soon with LFP batteries and foreign competition which will push US brands to compete better. It will be very analogous to the 70s auto revolution that forced US guzzlers out, this time dumb macho brick dino design SUVs will go in favor of much more intelligent designs. @ Louis Gander stop watching brain damaging FOX propaganda. Around here at least you can learn.

@ Louis Gander BTW EV's use 3X-10X less energy now, and only a few months driving are needed to compensate for a little more energy to build them. And as the clean energy transition continues and accelerates, EV emissions will drop towards eventual zero. So you should thank EV drivers for reducing gas prices by reducing demand.