The Mobility House has fully commissioned an intelligent charging and energy management solution that will reduce the total cost of ownership for King County Metro’s new electric bus charging pilot by more than $1 million dollars.

The test charging facility, which can charge up to nine coaches simultaneously, was created with an “interchangeable design” that utilizes charging infrastructure from three manufacturers—ABB, Siemens and Heliox—meaning all the major battery-electric buses will be able to successfully charge at any station. The facility will also be able to charge electric vehicles already in use by Metro and King County.

Metro leveraged The Mobility House’s energy and charge management solution ChargePilot for its compatibility with all three brands of charger, as well as its cost-saving load management and smart charging capability. 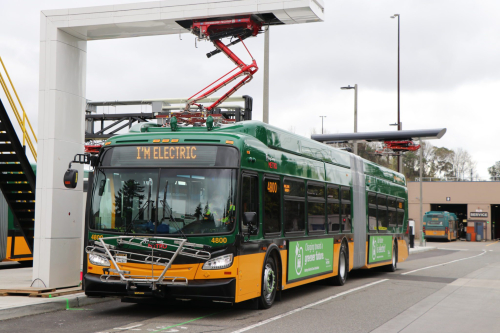 King County Metro’s new battery-electric bus being charged at the South Base campus.

Based on Seattle City Light’s local territory rates developed in conjunction with Metro, ChargePilot is anticipated to save Metro at least an estimated $9,457.20 per month on average in operating expenses.

The new chargers have a combined nameplate capacity of 4.63 Megawatts (MW), making it the largest transit bus charging station in the United States. As a result of modeling and evaluating the project goals (timelines) the Test Facility chose 2.5 MW of transformer capacity.

The cost to upgrade the transformer could have cost Metro $900,000 to $1M and might have taken longer than two years to complete. Instead, ChargePilot’s local controller works to manage charging load intelligently and keep onsite power usage below the facility’s transformer limitation, obviating the need for utility upgrades and saving project time and money.

In collaboration with The Mobility House, we will be able to experiment with and learn from a variety of hardware solutions that we believe will help us achieve our long-term electrification goals.

—Kevin Kibet, the manager of the project for King County Metro