Solaris has been awarded an order for 87 hybrid buses that will be used in the metropolitan area of Barcelona (Spain). The hybrid fleet will be managed by AMB (Area Metropolitana de Barcelona), the institution that administers urban transport in the city and its neighboring municipalities. The low-emission hybrid Urbino will be delivered to the customer starting next November. 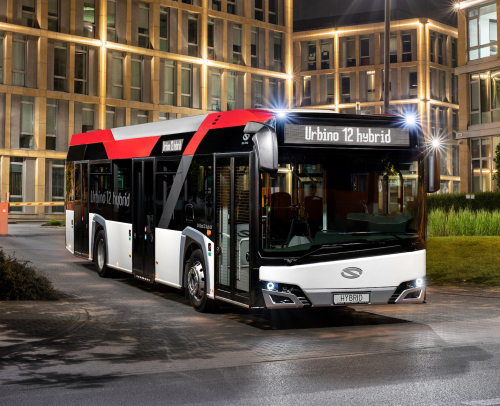 The 12-meter Urbino 12 hybrid vehicles will join 30 identical models that AMB ordered in March 2021. This investment is in line with the policy adopted by Catalonia’s largest city to purchase only low- or zero-emission vehicles from 2021.

The tender was managed by local operator TMB (owned by AMB), but the newly ordered Solaris buses, like the previous 30 vehicles, will join AMB’s fleet and will serve the entire Barcelona metropolitan area.

All the vehicles ordered will feature equipment similar to that installed in the models ordered in 2021. There will be a hybrid drive system consisting of an electric traction motor and an internal Euro 6 combustion engine producing more than 150 kW.

With supercapacitors to store and use recovered energy, the buses will deliver lower energy consumption and therefore lower emissions. Similar energy savings will be achieved with the Arrive & Go system, which turns off the engine when approaching a stop and turns it back on again when leaving.

The purely electric operation mode reduces noise and emissions. Operating in the Arrive & Go mode, the buses will alert pedestrians to the presence of the electric vehicle with audible signals.

Currently, more than 100 Solaris buses run in the metropolitan area of Barcelona, including almost 90 hybrid and 19 electric vehicles.