Achates Power announced that the 10.6-liter, heavy-duty opposed-piston, three-cylinder diesel engine it developed in a project funded by the California Air Resources Board (CARB) and several partners (earlier post) has entered fleet service with WALMART Corporation in a Peterbilt 579 tractor. It is the only diesel engine operating on the road capable of meeting CARB’s 2027 regulation, which requires a 90% reduction in emissions of NOx compared to current standards. 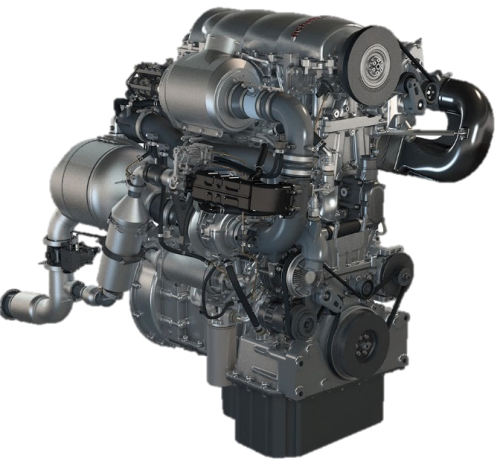 The 10.6-liter engine. The three cylinders are in-line, with the opposed pistons moving vertically.

The project team also demonstrated that the engine reduces carbon dioxide by 10%. The Achates Power ultra-low-NOx engine is engineered to achieve superior fuel efficiency because of its lower heat losses, improved combustion and reduced pumping losses.

The cleaner engine is able to deliver ultra-low NOx by managing exhaust gas temperatures to ensure rapid catalyst light-off and by maintaining aftertreatment temperatures at optimum operating conditions in all driving conditions. 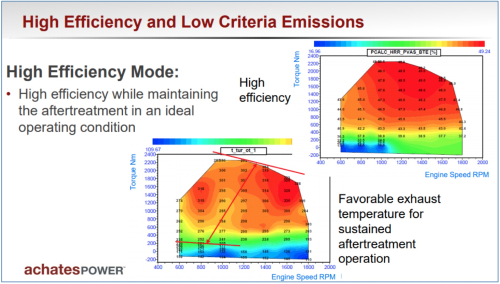 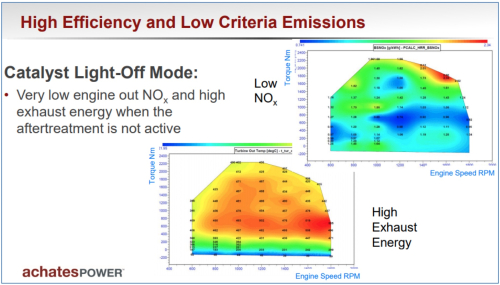 The catalyst light-off mode delivers the capability that allows Achates to manage extremely low engine-out NOx and also very high exhaust gas temperatures. This mode is used when the aftertreatment system is not yet active to make sure the tailpipe emissions remains very low. Taken from a 7 April 2021, online program review of the Heavy-Duty Diesel Demonstration Program hosted by CALSTART.

The opposed-piston engine can use existing manufacturing facilities, processes, and materials to allow rapid time-to-market and deployment. It also uses existing components and supply chains. It is expected to cost less than current engines, even as it meets much more stringent environmental regulations. It does not require any additional emissions control devices and has a reduced part count compared to conventional engines.

In addition, Achates Power is conducting further testing with a fully aged catalyst (the equivalent of 800,000 miles of operation) to demonstrate continued ability to meet CARB’s stringent standards.

Achates Power is backed by the Oil and Gas Climate Investments, Saudi Aramco Energy Ventures, and other investors.

I hope many will be interrested to buy.

About time this engine went into service somewhere.  Now if we could only see the 37 MPG F-150 we were promised.

20 years ago, this would have been a great development. I think that most over-the-road vehicles will go battery electric especially if the lithium sulfur batteries become viable.

In the late nineties I worked with a guy who had been working on this type of engine and it would have held a lot of promise if it had been made back then but now the party for this engine is already over and I'm afraid that's what happens when you just throw money after something without demanding timely results. I blame Bill Gates:-))
I've been reading about Achates for decades and something ground breaking was always promised to be 'just around the corner'.
A nowadays common EV motor the size of a watermelon has more power than this.