Essam El-Hannouny, a principal mechanical engineer at the Department of Energy’s (DOE) Argonne National Laboratory, won a Technology Commercialization Fund (TCF) Award from DOE to expand his research on how a renewable alcohol-based biofuel can serve as a dual fuel to help decarbonize locomotive engines. His research is also relevant to port and inland marine vessels, such as tugboats and ferries.

El-Hannouny is working closely with Progress Rail, a Caterpillar company, to develop a second fuel system that can be installed in existing locomotives to supply hydrous ethanol to engines. Hydrous (or wet) ethanol is the most concentrated grade of ethanol that can be produced by simple distillation, without the further dehydration step necessary to produce anhydrous (or dry) ethanol. Hydrous ethanol (also sometimes known as azeotropic ethanol) typically ranges from 186 proof (93% ethanol, 7% water) to 192 proof (96% ethanol, 4% water). (Earlier post.)

It’s a good, fast way to adapt technology into an existing engine by manufacturing a retrofit kit that can be installed on current engines or on newer engines.

El-Hannouny’s research is funded by two different DOE offices in the Office of Energy Efficiency and Renewable Energy (EERE). The first is the Vehicle Technologies Office (VTO), which aims to advance combustion engine technology and simultaneously reduce criteria emissions, such as carbon monoxide, nitrogen oxides and ozone. The second is the Bioenergy Technologies Office (BETO), which supports groundbreaking technologies to produce fuels, products and power from non-food sources of biomass and waste resources. 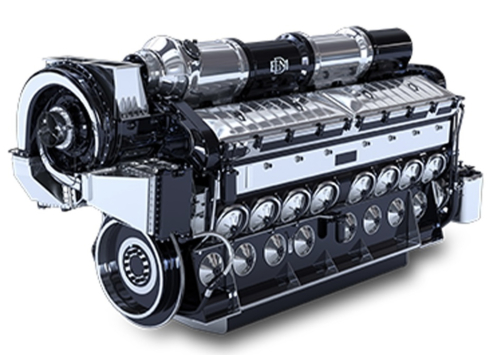 Argonne is working closely with Progress Rail, a Caterpillar company, to develop a two fuel system that can be installed in existing locomotives to supply hydrous ethanol to engines. (Image by Progress Rail.)

El-Hannouny believes the rail industry could retrofit most engines to accept the dual fuel technology within two to three years of the project’s conclusion.

Adapting existing fleets is a compelling issue for rail.

Locomotives have extremely long service lives. It takes a really long time to get older units out of service.

Older locomotive engines generate a surprising amount of unwanted emissions. In a recent California Air Resources Board study of port areas and sources of emissions there, rail ranked second in creating NOx emissions due to the use of older locomotives to move heavy cargo around the port. In fact, El-Hannouny’s focus initially was on finding a criteria emissions reduction technology for NOx.

So basically “Moonshine”. Only distillation required.
MythBusters already proved your car can run on Moonshine ( https://mythresults.com/moonshiner-myths) and there is a lot of food waste that could be used - 108 Billion pounds and can be made into Ethanol easily Vodka - (https://www.winemag.com/2018/05/14/sustainably-food-waste/ and this more technical article - https://pubs.acs.org/doi/10.1021/jf5054029).

Why are we shelling out Taxpayer money to solve old problems on obsolete devices? Why are we not electrifying the trains instead?