Following two variants with V8 engines, Mercedes-AMG is presenting the entry-level SL 43 version of its newly developed roadster icon. The SL 43 features an M139 in-line two-liter, four-cylinder gasoline engine with an electric exhaust gas turbocharger—used for the first time in a production vehicle. 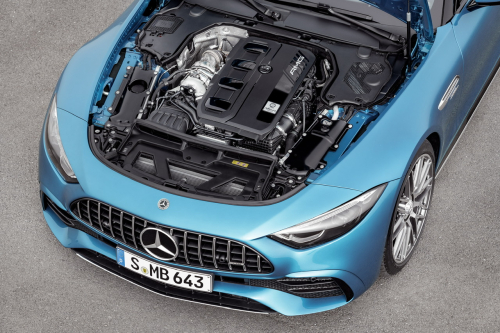 This technology comes from Formula 1. The system in the SL 43 is a direct derivative of the development successfully used by the Mercedes-AMG Petronas F1 Team for many years in the premier class of motorsport. The new form of turbocharging delivers particularly spontaneous throttle response across the entire rev range, thereby offering an even more dynamic driving experience while increasing efficiency at the same time.

The turbocharger is operated via the 48-volt electrical system, which also feeds the belt-driven starter-generator (RSG). As a result, the Mercedes-AMG SL 43 has a rated output of 280 kW (381 hp) at 6750 rpm and a maximum torque of 480 N·m available between 3250 rpm and 5000 rpm. An additional short-term boost of 10 kW (14 hp) from the RSG in available in certain driving situations.

In its long history, the SL has repeatedly set technological milestones. For example, while the legendary 300 SL Gullwing in 1954 was the world’s first series-produced passenger car with direct petrol injection, the new Mercedes-AMG SL 43 is now the very first series-produced vehicle with an electric exhaust gas turbocharger. With this technology, the SL also has an outstanding performance range in its entry-level version. This means that our seemingly smallest SL combines the typical AMG Driving Performance with luxury and comfort at the absolute top level. What’s more, with this innovative engine we are undoubtedly also appealing to a wider clientèle.

—Philipp Schiemer, Chairman of the Board of Management of Mercedes‑AMG GmbH

The electric exhaust gas turbocharger is a fascinating example of the extensive transfer between Formula 1 technology and the development of production vehicles. In implementing this in conjunction with our powerful M139 four-cylinder, we were also able to draw on the enormous wealth of experience of our colleagues at Mercedes-AMG High Performance Powertrains. The technology increases agility and thus driving fun, while at the same time improving the efficiency of the drive system. We are pursuing ambitious goals with a view to our electrified future. Innovative components such as the electric exhaust gas turbocharger help us to achieve this.

The operating principle of the electric exhaust gas turbocharger is based on the same technology used by the Mercedes-AMG Petronas F1 Team. An electric motor around four centimeters thin is integrated directly on the turbocharger shaft between the turbine wheel on the exhaust side and the compressor wheel on the intake side. Electronically controlled, this drives the shaft of the turbocharger directly and thus accelerates the compressor wheel before the exhaust gas stream starts to drive it conventionally.

This significantly improves immediate response from idle speed and across the entire engine speed range. The combustion engine responds even more spontaneously to accelerator pedal input, while the overall driving experience is more dynamic.

In addition, the electrification of the turbocharger enables higher torque at low revs. This also increases agility and optimizes acceleration from a standstill. Even when the driver takes their foot off the accelerator or applies the brakes, the technology of the electric turbocharger is able to maintain the boost pressure at all times. This ensures so that a continuous immediate response.

The turbocharger works at speeds of up to 170,000 rpm, which enables a very high airflow rate. The turbocharger, electric motor and power electronics are connected to the combustion engine's cooling circuit to create an optimal temperature environment at all times.

The second-generation RSG also functions as a mild hybrid in the 48-volt on-board electrical system, which in addition to the temporary power boost enables functions such as gliding mode and energy recovery for maximum efficiency. At the same time, the 48-volt technology also increases comfort, as the transitions between the start-stop function and the gliding mode function are almost imperceptible.

The M139 engine, which has long been used transversely in Mercedes‑AMG compact models without an electric exhaust turbocharger, is positioned longitudinally in the SL 43. In the entry-level model in the SL series, which always features rear-wheel drive, it is also combined with the AMG SPEEDSHIFT MCT 9G transmission (MCT = Multi-Clutch Transmission) for the first time.

A wet start-off clutch replaces the torque converter. It reduces weight and, thanks to its lower inertia, optimizes response to accelerator pedal input, especially during spurts and load changes. The elaborately calibrated software ensures extremely short shift times as well as fast multiple downshifts if required.

From a standstill, the SL 43 accelerates to 100 km/h in 4.9 seconds if required, and the top speed is 275 km/h. In addition to the performance it offers, the entry-level model of the series is also distinguished by comparatively low consumption and emission figures: combined fuel consumption 9.4-8.9 l/100 km (25-26.4 mpg US), combined CO2 emissions 214-201 g/km.

Mercedes designs and builds some very complicated ICEVs; and, at this point they are impractical at best because of the advantages pure BEVs offer...I sometimes think they engineer mechanical solutions to problems just to enjoy the complications. Beware to the buyer; when it breaks, you may need to float a loan to recover the expense to have it fixed.

I find the technology of the SL43 very interesting. A 2.0L I-4 Turbo petrol engine with almost 400 HP and 500Nm is very technological and of course typical Mercedes-AMG, which can actually replace the 4.0L V8 BiTurbo. The price drop of $60,000 is also interesting. The SL43 costs only $120,000 which is still very expensive for a 2.0L 4 cylinder convertible.
Thank you Mercedes-AMG for this super technology.

Now I ask the question:
How heavy, expensive and with what range (MPGe) would a comparable EV convertible be?