The Veolia project will be the largest biorefinery project producing bio-methanol from a pulp mill, but not the first. Swedish market pulp giant Södra launched the first pulp mill biomethanol plant at its Mönsterås mill, in collaboration with ANDRITZ, in 2020. Using the A-Recovery+ concept from ANDRITZ, the plant has a capacity to produce 6.3 million liters of biomethanol which will be sold as a substitute for fossil-based methanol in the transport sector.

The Kraft pulping process transforms wood chips into pulp, from which a broad range of paper products are made. Black liquor is the waste byproduct from the kraft pulping process after pulping is completed. Black liquor contains most of the original cooking inorganic elements and the degraded, dissolved wood substance, including methanol, and hundreds of other components.

Veolia has been a major supplier to the pulp and paper industry since the 1960s for HPD black liquor evaporation systems. Since then, Veolia has more than 450 installations worldwide for mills in Brazil, Indonesia, China, Japan, Australia, South Africa and several European countries. The Veolia black liquor evaporation systems for the pulp and paper industry feature methanol rectification and handling systems, among other characteristics.

Developed in close cooperation with Metsä Fibre, the largest cooperative forestry association in Europe, the biomethanol refinery will be based on Veolia’s innovative industrial-scale concept of commercial bioproduct-derived bio-methanol production, which safely integrates the refining of crude methanol into the pulp production process. Raw methanol recovered from the pulp process needs to be purified from nitrogen and sulfur and then further refined for use as commercial biomethanol.

The refinery, owned and operated by Veolia, will be adjacent and partly built into Metsä Fibre’s Äänekoski plant in Finland. With an annual production capacity of 12,000 tons (about 15 million liters), the plant, due to come on stream by 2024, will allow the avoidance of up to 30,000 tons of CO2 emissions per year by replacing fossil fuel for transportation. The €50-million investment is supported by a grant from the Finnish ministry of economy and employment. 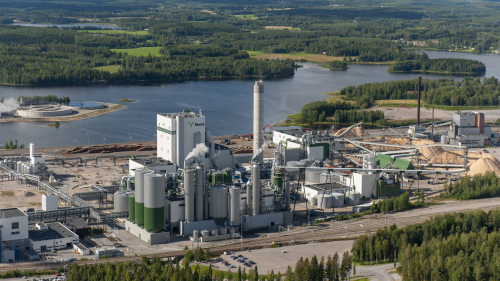 Our biorefinery project with Metsä Fibre is in line with Veolia’s strategy to develop local energy loops allowing decarbonization and energy sufficiency. It illustrates our capacity to act as an ecological transformation enabler through industrial integration across various sectors to develop scalable and sustainable solutions for locally produced CO2-neutral fuels.

The advantage of our industrial concept is that it is replicable at around 80% of the pulp mills worldwide. It has a potential to unlock an additional, locally generated feedstock of CO2-neutral biomethanol for biofuel that could be estimated at 2 million tons.

Metsä Fibre is a leading producer of bioproducts, biochemicals and bioenergy. It is the world’s largest producer of softwood market pulp and a globally significant manufacturer of sawn timber.

Bio-methanol and bio-methane are begging for us to pick them as the low hanging fruit they are. They seem so good, so low in cost, so inevitable, compared to the perfect (and some would say perfectly dangerous) ammonia.
Reduce shipping by ocean vessels, sure. But the ocean vessels we use need a standard fuel, and methanol seems to be it.

Bio-methane is as much of a climate hazard as fossil methane.  We have to be careful with it.  Steam-reforming it to CO + 3 H2 and then converting the syngas to something like dimethyl ether eliminates the climate threat and makes a much more easily-stored product.