Aurora Innovation and Werner Enterprises, a premier transportation and logistics provider, announced a collaboration and commercial pilot to test and deploy safely autonomous trucks on one of the most commercially active and critical stretches of highway in the US.

Starting this week, Aurora Driver-powered trucks are hauling loads between Fort Worth and El Paso on behalf of Werner. This lane represents the middle leg of one of the busiest commercial thoroughfares for Werner and the US. trucking industry: Atlanta to Los Angeles. Introducing an autonomous route between Fort Worth and El Paso allows Werner to move freight seamlessly and reliably on a subset of one of its most voluminous lanes.

The collaboration with Werner strategically broadens Aurora’s customer ecosystem to include multiple carrier types. The pilot is designed to advance the Aurora Driver, and Aurora Horizon, Aurora’s autonomous truck product, to develop a robust service for carriers.

Today, operators are accompanying each truck in the pilot fleet on weekly hauls, ready to assist if necessary. Over the next several months, Aurora and Werner expect to increase the frequency of these loads and are exploring further autonomy for vehicles in this lane.

The Fort Worth to El Paso lane (via I-20 and I-10) is more than 600 miles and takes approximately nine hours to complete. Its long-distance and monotony contribute to this lane’s reputation for being unappealing for truck drivers. By deploying the Aurora Driver on such hauls, Aurora and the companies it is working with are building a future in which autonomous trucks can handle less popular routes, while human drivers transport more convenient hauls that are conducive to desirable lifestyles. Launching this new route is a technical and operational milestone toward deploying the Aurora Driver at scale. To start this commercial pilot, Aurora brought two new terminal sites online to service this route and built the technological and operational infrastructure required to operate it. The technical, operational, and commercial muscle Aurora is building in the process will serve its customers well as they deploy Aurora-Driver-powered trucks at scale. 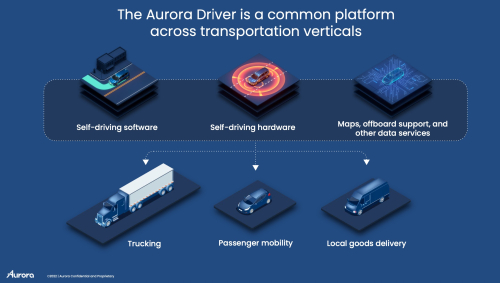 The Aurora Driver is a self-driving system designed to operate multiple vehicle types, from freight-hauling semi-trucks to ride-hailing passenger vehicles, and underpins Aurora Horizon and Aurora Connect, its driver-as-a-service products for trucking and ride-hailing. Aurora is partnered with industry leaders across the transportation ecosystem, including Toyota, FedEx, Volvo Trucks, PACCAR, Uber, Uber Freight, US Xpress, and Werner.