A new analysis from the Governors Highway Safety Association (GHSA) projects that US drivers struck and killed 3,441 pedestrians in the first six months of 2021, up 17% (507 additional lives) from the same period the year before. This projection continues a decade-long trend of rising pedestrian deaths on roadways.

GHSA’s annual Spotlight on Highway Safety report offers the first look at state and national trends in 2021 pedestrian traffic deaths, based on preliminary data provided by State Highway Safety Offices (SHSO) in all 50 states and the District of Columbia (D.C.).

The analysis found that, nationwide, there were 1.04 pedestrian deaths per 100,000 people, up from 0.90 in both 2020 and 2019. The data also shows that the rate of drivers striking and killing pedestrians rose to 2.3 deaths per billion vehicle miles traveled (VMT) in the first six months of 2021. That’s an increase from the historically high rate of 2.2 deaths per billion VMT in 2020 and significantly more than the rate of 1.8-1.9, which remained steady in 2017-2019. The data analysis was conducted by Elizabeth Petraglia, Ph.D., of research firm Westat. 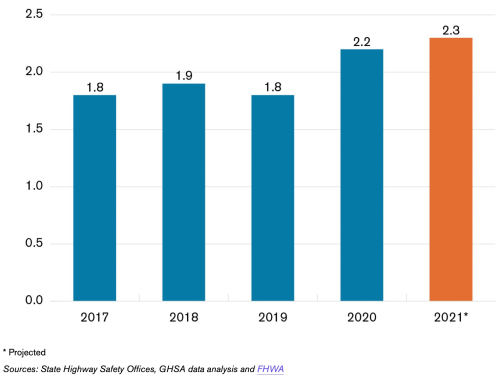 GHSA suggests that a combination of factors is causing this increase in both the total number of pedestrian deaths and the fatality rate. These factors include a surge in dangerous driving that began at the start of the pandemic and has not abated; larger vehicles that are more likely to injure seriously or to kill people on foot in the event of a crash; roads designed to prioritize fast-moving traffic over slower speeds that are safer for pedestrians; and inadequate infrastructure such as sidewalks and lighting in many parts of the country.

To address these causes and reduce the number of pedestrian deaths, GHSA supports a comprehensive solution based on the Safe System approach, as outlined in the US Department of Transportation’s National Roadway Safety Strategy.

Each of the five elements of the Safe System approach—safe road users, safe vehicles, safe speeds, safe roads and post-crash care—contribute in different ways to provide this multi-layered safety net that can protect people outside of vehicles.

The increase in pedestrian fatalities over the first half of 2021 continues a long-term trend of roadways being more dangerous for people on foot. Over the last decade, pedestrian deaths have skyrocketed by more than 2,000—from 4,457 in 2011 to 6,516 in 2020—a 46% increase. Overall traffic fatalities are also surging. The National Highway Traffic Safety Administration (NHTSA) reported that 31,720 people died in crashes in the first three quarters of 2021—the highest number of fatalities during the first nine months of any year since 2006.

At a state level, pedestrian fatalities increased in 39 states and D.C. during the first half of 2021. Meanwhile, 11 states experienced declines in the number of pedestrians killed by drivers, with three states reporting two consecutive years of declines and two states posting double-digit fatality reductions in 2021.

The analysis also noted that three states—California, Florida and Texas—accounted for 37% of all pedestrian deaths in the first six months of 2021 but are home to 27% of the US population. These states have warmer climates, which tend to increase travel on foot, as well as many urban areas where pedestrians and motor vehicles are more likely to share the road.

GHSA will publish a second, comprehensive Spotlight report this spring that will include state fatality projections for all of 2021, an analysis of recently released 2020 data from NHTSA’s Fatality Analysis Reporting System (FARS) and an overview of proven strategies states and communities are employing to reduce pedestrian crashes and injuries.