Mercedes-Benz Trucks is introducing the third generation of its OM 471 heavy-duty diesel engine this year; the engine will deliver increased fuel efficiency and compliance with the strictest emissions standards such as Euro VIe.

The third generation of the OM 471 installed in the Mercedes-Benz Actros and the Mercedes-Benz Arocs features a number of technical innovations aimed at reducing the Total Cost of Ownership (TCO) in terms of fuel-saving driving, lower operating costs and higher yields, without sacrificing performance, driving dynamics or driving comfort, said Christoph Mertens, Project Manager for the new engine at Daimler Truck.

Further optimized combustion, application-oriented turbochargers and reduced friction. The improvements in efficiency for the third generation of the OM 471 are the result of a number of engine innovations. For example, the geometry of the piston recess, the injection nozzle design and the parameters of the cylinder head relevant for gas exchange were subject to an extensive optimization process. In this way, the compression ratio of the six-cylinder in-line engine has been increased from 18.3:1 to 20.3:1; this leads to more efficient combustion with a peak ignition pressure of 250 bar. 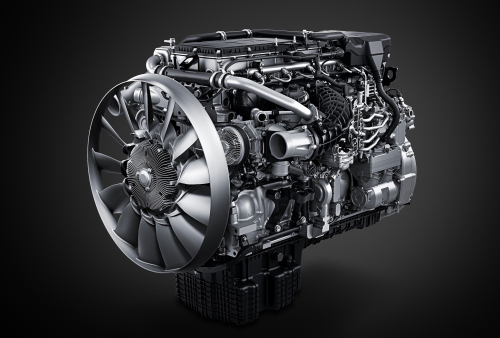 One of the most important levers in increasing fuel efficiency in modern diesel combustion engines is turbocharging optimization. With the third generation of the OM 471, Mercedes-Benz Trucks is introducing two new turbochargers developed and manufactured in-house which are precisely adapted to the broad range of customer requirements. In the consumption-optimized variant, the focus is on the lowest possible fuel consumption; it is predestined for use in long-distance haulage with an engine rated at up to 350 kW (476 hp).

Reduced friction losses and pressure control with low-viscosity oil. In addition to combustion and turbocharging, friction reduction is the third important lever for improving fuel efficiency.

For this purpose, the third-generation OM 471 has a newly developed engine oil pressure control valve. It is installed behind the engine oil pump and in front of the oil thermostat. An electrical actuator enables characteristics map-controlled use of the pressure-reducing valve. Available reductions in engine oil pressure are determined in a complex matrix that takes into account all engine components and their specific requirements, such as lubrication or cooling.

The system limits the counterpressure and also increases the uniformity index of the AdBlue, which leads to improved NOx conversion and lower fuel consumption. The NOx sensors together with the closed and adaptive NOx closed-loop control circuit and a predictive SCR temperature model have enabled emission stability to be improved even further.

It is even compliant with the strictest emission standards, such as Euro VIe, which call for effective limitation of exhaust gas emissions over the entire normal service life of a vehicle under normal usage conditions.

PowerShift Advanced and Top Torque. Alongside profitability, robustness and reliability, Mercedes-Benz Trucks has once again turned its attention to another important factor for customers in the third generation of the OM 471: driving dynamics. Engineers focused on the drivetrain for this purpose.

For example, the new PowerShift Advanced automated transmission control enables faster and smoother moving off and acceleration in many situations thanks to precise gear selection. Faster gear changes reduce the torque interruption time by up to 40% in the upper range.

Accelerator pedal parameterization has also been further optimized: Increased sensitivity in the lower pedal travel enables significantly more sensitive maneuvering, while the direct response time in the upper pedal travel results in increased dynamics under high load requirements. It also makes it easier to drive around, and accelerate out of roundabouts.

Another highlight is the extended Top Torque range. Available for engine output levels 330 kW (450 hp) and 350 kW (476 hp) in conjunction with the G281 transmission, a powerful 200 N·m torque is available to the crankshaft in gears 7 to 12 in the “A Standard” program.