In the new environment of energy insecurity intensified by Russia’s invasion of Ukraine and the resulting response from the West, the UK government has released a new British Energy Security Strategy that sets out how Great Britain will accelerate the deployment of wind, new nuclear, solar and hydrogen, while supporting the production of domestic oil and gas in the nearer term. Under the plan, 95% of electricity by 2030 could be low-carbon, the government said.

The strategy will see a significant acceleration of nuclear, with an ambition of up to 24GW by 2050. This would represent up to around 25% of projected electricity demand—three times more than now. Currently, low-carbon nuclear supplies 15% of power as a steady source of generation to complement intermittent renewables.

Subject to technology readiness from industry, Small Modular Reactors will form a key part of the nuclear project pipeline.

A new government body, Great British Nuclear, will be set up immediately to bring forward new projects, backed by substantial funding. The government will also launch the £120-million (US$156-million) Future Nuclear Enabling Fund this month. The government will work to progress a series of projects as soon as possible this decade, including Wylfa site in Anglesey. This could mean delivering up to 8 additional reactors, equivalent to one reactor a year instead of one a decade. 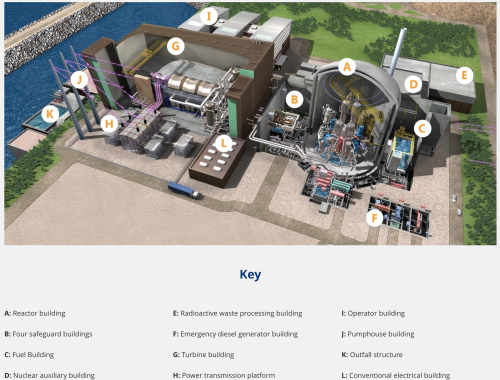 Layout of Hinkley Point C. EPRs—originally known as European Pressurized Water Reactors—are a type of Pressurized Water Reactor (PWR). The design of the UK EPRs that will be built at Hinkley Point C represents a major development on previous PWRs, making them amongst the safest and most efficient civil nuclear power generators ever designed. The UK EPR design also marks significant progress towards sustainability. It has been designed to use less uranium and produce almost a third less long-lived radioactive wastes compared with water reactors in operation today.

Britain’s first nuclear power station in a generation, Hinkley Point C, is currently under construction, and the government is in negotiations with the developer on the Sizewell C project in Suffolk. The two projects combined would generate about 6.5GW of power.

The plan will also look to increase the UK’s current 14GW of solar capacity which could grow up to 5 times by 2035, consulting on the rules for solar projects, particularly on domestic and commercial rooftops.

The government also aims to double its ambition to up to 10GW of low-carbon hydrogen production capacity by 2030, with at least half coming from green hydrogen and utilizing excess offshore wind power to bring down costs. This will not only provide cleaner energy for vital British industries to move away from expensive fossil fuels, but could also be used for cleaner power, transport and potentially heat.

GE has a fast reactor that will burn plutonium

If solar and wind (with pumped hydro and battery for backup and smoothing) will provide 60GW, stop right there and lower demand. Burning spent nuclear fuel is a different matter, but necessary.

Pumped hydro is simply not up to the task of mass energy storage on a national level.

The problem is that decarbonization requires that electric demand go up.  Way, WAY up.  Lots of things currently done by burning fuel will have to be electrified, and that electricity has to be generated without carbon emissions.  Nuclear power is just the ticket; wind and solar are unfit for purpose.

They are late on gold hydrogen or they think this is a hoax. As soon as gold hydrogen will be started, then it will be better than the other solutions.

There was a recent YouTube video on Nuclear Power that is interesting. I believe that it is from England. The conclusions is that Nuclear Power is safest power and has the lowest lifetime greenhouse emissions and utilizes the least amount of land. The problems identified are cost and build time. And, yes, nuclear is safer than wind and solar even when you throw in the Chernobyl disaster and if you ignore that Soviet era idiocy, the are no operational deaths and maybe one cancer death attributable to Fukushima.

I think that the cost of renewables needs to include the cost of sufficient storage to make it truly dispatchable and that we should be using lithium-ion for replacing IC engines.

I just that we can build enough nuclear power soon enough.