In 2021, for the second consecutive year, US nuclear electricity generation declined, according to the US Energy Information Administration (EIA). Output from US nuclear power plants totaled 778 million megawatthours in 2021—1.5% less than the previous year. Nuclear’s share of US electricity generation across all sectors in 2021 was similar to its average share in the previous decade: 19%.

The loss of electricity generation from the retirement of Indian Point Unit 3 in 2021 was partially offset by an increase in the generation of the remaining nuclear fleet at a higher capacity factor. Capacity factors measure how much of the time units operate, and nuclear units tend to be run more of the time than almost all other electricity-generating technologies.

Although output has been rising from renewable energy sources and from turbine plants using natural gas, the US nuclear fleet continues to operate at high and consistent utilization rates, EIA said.

Financial pressures from competitive wholesale power markets remain the primary cause of nuclear power plant retirements. Four units at two sites in Illinois had announced their intention to retire but then reversed that decision after the Illinois state legislature provided financial incentives to support the nuclear units’ continued operation.

The Infrastructure Investment and Jobs Act (IIJA), which was enacted in November 2021, includes the allocation of $6 billion to prevent the premature retirement of existing nuclear power plants. The funding will be made available to nuclear power plants that might otherwise retire and that are certified by the Nuclear Regulatory Commission as safe to continue operations. 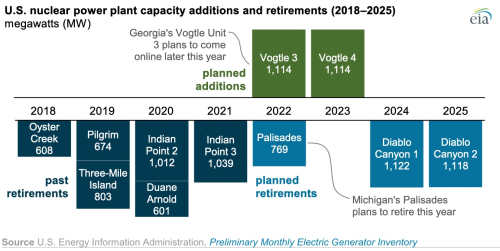 Two nuclear generating units now under construction in Georgia (Vogtle Units 3 and 4) plan to come online by the end of 2023. Each unit is rated at 1,114 MW, and they will be the first nuclear units to come online in the United States since Tennessee’s Watts Bar Unit 2 came online in mid-2016.