Toyota has launched the all-electric Toyota bZ4X SUV (earlier post). Coming to dealerships this spring with an EPA-estimated range rating of up to 252 miles (for XLE front-wheel drive models, based on EPA’s testing procedure standards), the 2023 Toyota bZ4X will have a starting MSRP of $42,000. 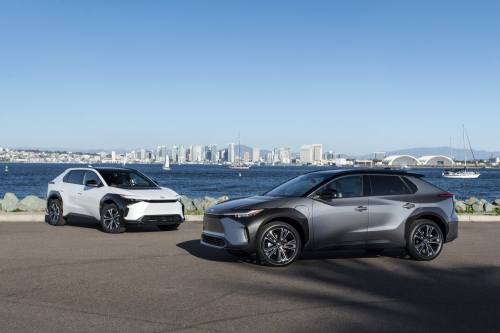 bZ4X is the first Toyota vehicle to be launched under the global bZ—“Beyond Zero”—series, with more bZ vehicles on the horizon intending to elevate the BEV segment for years to come. Toyota plans to expand to around 70 electrified models globally by 2025. This future lineup will feature 15 dedicated BEVs, including seven carrying the bZ (Beyond Zero) brand moniker.

The bZ4X is built on the BEV-dedicated e-TNGA platform, a first for Toyota. Through this architecture, bZ4X achieves a low center of gravity and greater rigidity thanks to the high-capacity Lithium-ion battery pack placed flat under the floor. 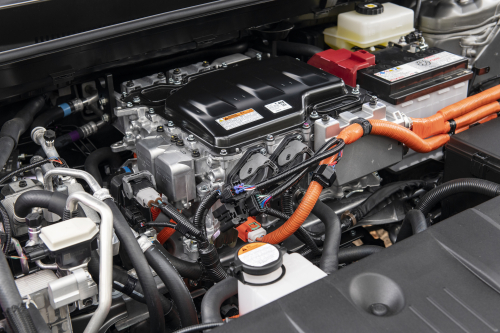 Handling is due in part to the battery cross-framing structure, which adds to overall vehicle rigidity. The adoption of a lightweight body structure with sections of high tensile steel reinforced frame components around the battery pack coupled with a dynamic suspension contribute to the agile responsiveness of bZ4X.

An intelligent throttle feature provides a smoother feel when accelerating and decelerating and slip suppression provides control on slippery roads. The Regenerative Braking Boost Mode feature reduces the frequency the brake pedal must be depressed, helping to reduce the burden on the driver.

Coupled with Multi-terrain Select, the new AWD system with X-MODE can be used in two modes (Snow/Dirt and Snow/Mud) to tackle slippery or uneven surfaces.

For unpaved and bumpy roads, engaging Snow/Mud Mode applies the brakes on spinning wheels to produce a limited-slip differential (LSD) effect for additional traction. This mode also tackles softer road surfaces covered by heavy snow, providing more vehicle stability by automatically positioning the tires to slip in a way that clears away snow or mud. In downhill situations that require the driver to apply heavy braking, Downhill Assist Control helps maintain a constant speed to allow the driver to concentrate on steering.

Another feature of the AWD system is Grip-Control, a low-speed system that leverages motor drive power modulation to achieve capable off-road performance during turns. This feature was developed as an added X-MODE function to determine road surface characteristics and maintain a constant speed to prevent slipping on rough roads, allowing the driver to focus more on steering.

All bZ4X models are equipped with a J1772/CCS1 (Combined Charging System (CCS)) socket, which allows for both home and public charging. The 6.6 kW onboard charger allows the bZ4X to charge from low to full in about 9 hours with a Level 2 charger either at home or at a public charger (at optimal outside temperatures).

New bZ4X owners can also include a ChargePoint home charging system into the cost of their new vehicle purchase or lease, as they will have the option to purchase a ChargePoint Home Flex Level 2 charger from participating Toyota dealerships or directly from ChargePoint online. ChargePoint Home Flex is ENERGY-STAR-certified and Wi-Fi-enabled, can be installed indoors or out, comes with a 23-foot charging cable to support different parking configurations and can charge electric vehicles up to nine times faster than a standard outlet. Translated for the bZ4X, the home charger can charge up to 25 miles of range per hour and fully charge the battery when plugged in overnight.

Qmerit has been selected to help guide bZ4X customers through the process of locating a certified EV charger installer, offering an initial free quote and additional services to support them all the way through to installation completion.

Driver Assist and Safety. bZ4X is the first to feature the latest Toyota Safety Sense safety package (TSS 3.0). This system has been enhanced by expanding the detection range of the millimeter wave radar and monocular camera. Toyota has enhanced the performance of each function and added new functions to assist in normal driving conditions.

For example, the Pre-collision system has been enhanced to offer Low-Light Cyclist Detection, Daytime Motorcyclist Detection and Guardrail Detection. Also, lane recognition is enhanced to add improved functionality while in Lane Tracing Assist mode. The goal of TSS is designed to help prevent or mitigate accidents, further reduce traffic fatalities and injuries and ease the burden on drivers. 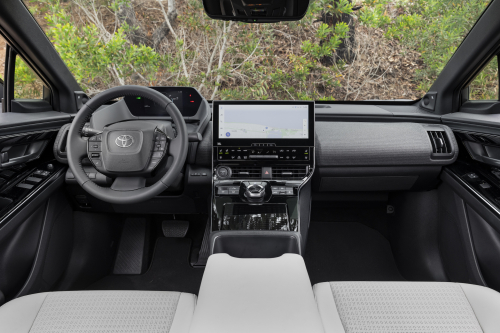 Blind Spot Monitor is standard on all grades. A new safety feature and a Toyota First, Safe Exit Assist, is also standard on bZ4X. This system helps support avoidance of collisions between an open door and/or occupants who have exited and vehicles approaching from the rear.

Bird’s Eye View Camera with Perimeter Scan including 360-degree Overhead View in low-speed drive and reverse, and Curb View is available on the Limited grade.

The engineering team strategically placed the Top-Mounted Meter right above the steering wheel with the goal to reduce the number of times the driver takes their eyes off the road. The parallax angle of the meter also extends the perspective for the driver when viewing, also achieving a reduced response time between the road and the MID. Even the steering wheel is more ergonomic—the spoke width has been reduced, achieving excellent grip comfort and the diameter of the wheel is smaller to allow for a meter layout that requires minimal eye movement.

In terms of battery safety, Toyota added many measures to help protect cell integrity, thanks to the design and a multiple monitoring system intended to protect the vehicle’s battery system. This includes: