While its emphasis is on all-electric drive systems for urban traffic, Daimler Buses is introducing the Mercedes-Benz Intouro with a hybrid module for inter-city transport as well as for a combination of regular-route and touring coach services. The hybrid module is available for all two-axle models with automatic transmission featuring the torque converter from the ample Intouro range. 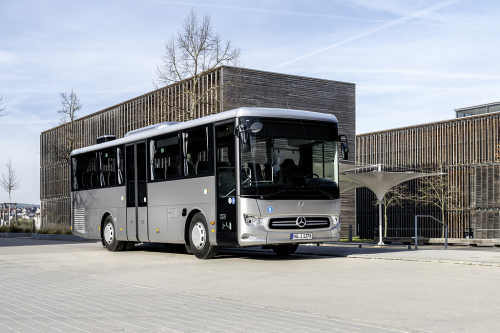 The hybrid module is also making its debut in an inter-city bus in the new Intouro K. This means that the model range is simultaneously expanding by a versatile and particularly maneuverable as well as economical bus with a wide range of applications.

The basic function of the Intouro hybrid is extremely simple: An additional electric motor acts as an alternator during the vehicle’s braking and overrun phases, converting braking energy into electricity. This current is stored and is available to the electric motor to support the combustion engine, especially when moving off, but also when accelerating.

The drive technology behind it is simple. One key component of the hybrid drive is the electric motor. The disc-shaped major assembly with integrated power electronics and a thickness of eight centimeters has been integrated between the combustion engine and the automatic transmission. Its output is 14 kW with a torque of 220 N·m.

In addition, a slight boost by the electric motor at idle speed improves the efficiency of the combustion engine. Both of these factors together result in a reduction in the fuel consumption. In the Intouro, this becomes particularly evident in inner city and suburban traffic where the driver is constantly alternating between the accelerator and brake pedals. The reduction is up to five percent in suburban and inner city traffic.

Supercapacitors serve as short-term energy storage units. The current generated by recuperation is stored in supercaps. These electric energy storage units are characterized by a high power density, are not sensitive to high power peaks, and have a long service life. In contrast to batteries, supercaps are ideal for the constant and rapid changes between charge and discharge when stopping and starting. The Intouro hybrid only needs a single braking maneuver from 50 km/h to a standstill to charge the energy storage units.

The power storage system of the Intouro hybrid consists of two modules. Each module contains 16 double-layer capacitors. Both modules together have a total capacity of 2 Ah and are mounted on the rear left-hand side of the roof (in the direction of travel) to save space. A cover protects the modules from external influences and sunlight. At the same time, a perforated side panel ensures the necessary cooling by the headwind.

An inverter converts the stored direct current into alternating current to drive the electric motor. Both the inverter and the electric motor are water-cooled. The additional radiator for this low-temperature cooling with a maximum of 65 degrees Celsius is located beneath the vehicle radiator to save space.

48-volt network, low added weight, unmodified operation. The Intouro hybrid does not need a complex high-voltage network which has its own necessary restrictions and safety requirements. The inter-city bus has a separate 48-volt network. This is classed as low-voltage technology and is safe to use.

The unmodified auxiliary assemblies are driven conventionally. Further advantages of the compact and uncomplicated technical structure of the additional hybrid drive: The required installation space is small, the outline remains unchanged, as does the interior—no passenger seats are lost. The added weight of the hybrid drive is 254 kg. As a result, the total number of passenger seats is only slightly reduced and is insignificant in practice.

The developers of the Intouro hybrid rely on tried and tested components already used in the successful Citaro hybrid. However, extensive adaptation measures were required as a result of a new electric/electronic structure of the Intouro with different control units.

The recuperation module is now also available for the Intouro for the first time, regardless of the hybrid module. In addition to the vehicle batteries, it stores the current generated by recuperation and makes it available when moving off or on inclines. This relieves the strain on the alternator and thus on the combustion engine, reducing fuel consumption. The energy storage unit is also mounted on the right-hand side of the roof (in the direction of travel) to save space. The recuperation module is a prerequisite for the Intouro hybrid.

The new hybrid module will be celebrating its debut in the Intouro model series in the compact Intouro K. It is particularly manageable with a length of 10.75 meters and a turning radius of just 18.34 meters. This makes it suited for trips through mountainous regions, on winding roads or for excursions with small groups.

The engine output of the Intouro K is optionally 220 kW (299 hp) or 260 kW (354 hp). Bus and coach operators can even choose from four transmission variants: six-speed manual transmission, fully automated Mercedes-Benz PowerShift transmission or automatic transmission with torque converter from Voith and ZF.

This should be the legal bare minimum lower emissions tech used for all vehicles.