A research team led by Prof. Pan Xiulian and Prof. Bao Xinhe from the Dalian Institute of Chemical Physics (DICP) of the Chinese Academy of Sciences has achieved the direct synthesis of isoparaffin-rich gasoline from syngas using ZnAlOx-SAPO-11 oxide-zeolite (OXZEO) catalysts. Isoparaffins are preferred components of high-quality gasoline because they are more environmentally friendly as octane number contributors than olefins or aromatics.

The researchers elucidated the active sites of isoparaffin formation, which provided guidance for the one-step synthesis of high-quality gasoline from syngas. Their study is published in ACS Energy Letters.

Previously, the DICP team proposed a new catalyst concept based on metal oxide-zeolite (OXZEO) bi-functional catalysts. This catalyst enabled the direct conversion of syngas to a variety of chemicals and fuels with high selectivity, such as light olefins, ethylene, gasoline, aromatics and oxygenates. The OXZEO concept provided a new technology platform for the highly efficient utilization of coal and other carbon resources. 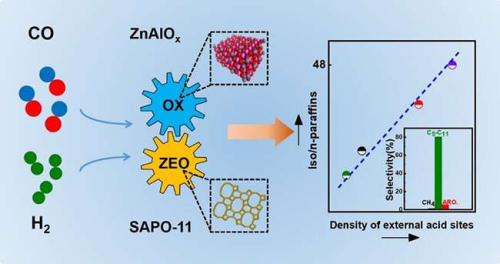 In this study, they achieved 34% CO conversion and 82% gasoline selectivity by modulating the distribution of the zeolite acid sites, in which the iso/n-paraffins ratio was as high as 38.

Moreover, a 150-hour on stream test of the catalyst indicated rather stable activity in the syngas-to-gasoline process.

Further studies showed that the external acid sites of the zeolite could be the active sites for the formation of branched—especially multi-branched—isoparaffins.

I don't want to be negative but i hear about synthetic gasoline since decade and i think that it won't be for sale near where i live for a lot of time. Actually i lose a fortune on petroleum gasoline and there is no hydrogen alternative. Recession is awaiting.

Exxon made MTG gasoline in New Zealand in the seventies