Mexico-based global construction materials company CEMEX is partnering with integrated chemicals and energy company Sasol ecoFT and renewable energy company ENERTRAG to combine CO2 with hydrogen to produce sustainable aviation fuel. This project is part of CEMEX’s Future in Action program to reduce its carbon footprint and contribute to a circular economy and an integral component of CEMEX’s master plan to develop a carbon neutral operation at its Rüdersdorf cement plant by 2030.

The consortium will source green hydrogen generated exclusively from wind and solar energy from ENERTRAG. The CO2 will come from CEMEX’s Rüdersdorf cement plant in Germany, which will provide 100 tons of CO2 per day in the project’s first phase. Sasol ecoFT will then contribute its technology to produce e-kerosene, which, once certified, can be blended to constitute up to 50% of jet fuel.

In this first phase, 15,000 tons of electric kerosene are to be produced annually, from the 100 tons of CO2 per day combined with 12 tons of hydrogen per day.

In the second phase, larger quantities of hydrogen are to be supplied by pipeline. The green hydrogen will be produced as part of the ENERTRAG IPCEI project “Electrolysis Corridor East Germany” with an electrolysis capacity of 210 MW, which will enable the production of 35,000 tons of e-kerosene fuel per year. Also in this project, only renewable electricity is used for the production of 40 tons of green hydrogen per day. This requires an increase in CO2 capture by another 300 tons per day.

The three partners have founded Concrete Chemicals GmbH, which is to implement the pioneering project on the CEMEX site in Rüdersdorf near Berlin. All three companies are equal partners in the joint venture. For the implementation of the project, the consortium is preparing funding applications to be notified at European level.

Sixty percent of the carbon emissions in the cement production process come from the chemical reaction that occurs in cement kilns. To reach carbon neutrality, these emissions must be captured, stored, or repurposed in some way. CEMEX is leading the way in these technologies through partnerships with other industries, the work of its R&D center, and investments from its venture capital arm, CEMEX Ventures. 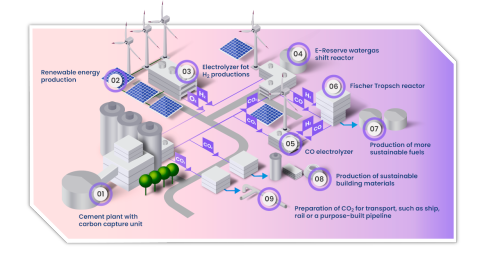 Sasol ecoFT is part of the Sasol Group and world-leader in the development and application of Fischer-Tropsch (FT) technology with more than 70 years’ experience. Sasol ecoFT leverages it proprietary technology, know-how and expertise to produce sustainable fuels and chemicals from green hydrogen and sustainable carbon sources via the Power-to-Liquids (PtL) process.