The Nikkei reports that Mitsubishi Heavy Industries (MHI)is moving ahead with its plans to develop and commercialize nuclear microreactors—reactors small enough to be delivered on trucks—by the end of the next decade. At 3 meters tall and 4 meters wide, the microreactors will weigh less than 40 tons. The reactor and power generating equipment will fit inside a standard 40' cargo container. 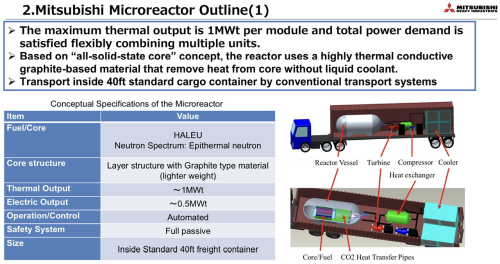 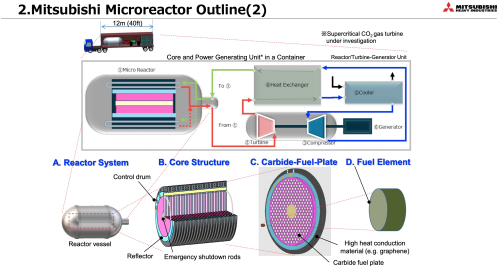 From an MHI presentation at a 2021 IAEA technical meeting.

The microreactors will have a maximum electrical output of 500kW. Multiple microreactor units could be combined to provide larger total power output. Mitsubishi plans to commercialize the technology in the 2030s at the soonest, once it receives approval from Japan and other governments.

Based on an all-solid-state core concept, the microreactor uses a highly thermal conductive graphite-based material that removes heat from core without liquid coolant.The nuclear reactor core and all other equipment will be contained in capsule containers that are tightly sealed.

MHI is planning mock-up tests from 2023 to 2025 to verify the cooling function—i.e., the passive core cooling by natural heat transfer without power source, water source, and operator action. The tests will not use nuclear fuels.

After those tests, prototype testing is planned to be performed from 2026 to 2030 to verify various features of the microreactor such as long-term operation, start-up/shutdown, and safety system functions, including passive shutdown and containment.

Highly enriched uranium will be used as fuel and will not require replacement during its entire duration of operations of approximately 25 years. Once the fuel is spent, the entire microreactor can be recovered.

Since the reactors will require minimal maintenance, they can be installed underground to reduce risk from natural disasters and terrorism.

Each microreactor is projected to cost tens of millions of dollars.

Operating at its full theoretical capacity, 24/7/365, this unit would produce $1m with of electricity per year assuming a value of $0.23 per kWh.

With a cost of “tens of millions” per unit, appears destined for mining and other remote, high value operations.

The beauty of electric trucks is how you provide the traction motor electrons is variable. It can be from batteries(BEV), an engine generator(hybride) or microreactor(nuclear), whichever you choose.

' The cost to produce 1 kilowatt-hour will exceed that of a conventional reactor, but will be in line with the cost it now takes to provide power to isolated islands. The microreactors will enable remote areas to access an economical source of power that is not reliant on carbon.'

Just to clarify, this is a way better solution than the status quo on small islands etc, with dirty carbon heavy very expensive diesel as the current fuel.

I doubt that this will be needed much though, as most inhabited islands etc are where there are excellent wind and solar resources.

Here is Skysails, who hopefully by now have deployed or are about to deploy their 80-200kw ( peak ) kite in Mauritius after their one on Germany:

That should be able to do power at a fraction of the cost of this nuclear system, and in combination with solar should cover most needs.

I am not a friend of making the perfect the enemy of the good, and support less than 100% more economic solutions.

Here is the current state of play in relatively small renewables with storage to get up to 24/7, 365 days:

Note that to do that they have to chuck everything at it, including not only batteries, but hydrogen storage, which will no doubt enrage purists here.

Nuclear in my view looks good for rather larger installations, say 70MW or so, where the heat can be used in district heating systems or to produce hydrogen at very low energy cost.

The economics of that are looking far better.