Toyota will invest $383 million in four of its US manufacturing plants—in Alabama, Kentucky, Missouri and Tennessee—to support the production of four-cylinder engines, including options for hybrid electric vehicles.

Toyota customers want vehicles that are fuel-efficient and electrified. These investments allow us to meet customer needs and quickly respond to an evolving market. We are committed to investing in the U.S., and our teams are ready to take on this new challenge.

Toyota Alabama: Huntsville, Ala., $222 million. Toyota Alabama will create a new four-cylinder production line with the capacity to produce engines for both combustion and hybrid electric powertrains. Additionally, the facility will expand its footprint by 114,000 square feet, which marks the plant’s sixth building expansion since 2003. Toyota Alabama has the capacity to build 900,000 engines annually and represents a nearly $1.5-billion investment. 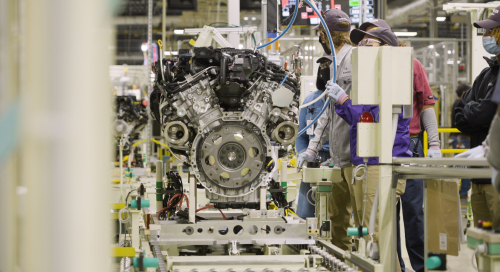 Toyota’s Commitment to the US. Last year, Toyota announced new investments totaling $5.1 billion into its US manufacturing operations to support electrification efforts, demonstrating its commitment to building where it sells and supporting local economies.

Not a good move; but, it shows how successful the fossil fuel lobby has been in convincing U.S. drivers to continue driving dirty gassers. The U.S. may be the last large country to transition to BEVs because of this successful misinformation campaign.

Some people, and apparently Toyota, cannot interpret "the writing on the wall" correctly.