Baker Institute report: China has positioned itself as a gatekeeper to the energy transition; nickel case study

The global push to convert the world to electric vehicles will cause supply chain complexities that could undermine the alternative energy transition in the United States, according to a new report from Rice University’s Baker Institute for Public Policy.

The detailed report—Need Nickel? How Electrifying Transport and Chinese Investment are Playing Out in Indonesia—focuses on nickel as a critical mineral, but has implications for the broader minerals and materials supply chains needed for broad-scale energy transition.

The success of the global march toward “decarbonization” depends on the complicated logistics that support it, along with the convoluted strategies that form its underpinning. The process of shoring up supply chains is a prerequisite to sound strategic planning: Without robust supply chains, even the most elaborate blueprint for implementation will prove ostentatious in practice. The global push for electrification, as worthy a cause as it may be, is not immune to such realities.

Indeed, the global push to electrify is creating new tensions and complexities that, if not properly managed and mitigated, will undermine the much-discussed “energy transition.” Emerging markets and developing countries are central to the “decarb” and electrification push, and are themselves maneuvering to attain advanced country status and a higher quality of life for their citizens. Minerals and the materials derived from them are at the heart of energy transition strategies, and emerging markets and developing economies are the overwhelming providers. The industrialized world brushes these realities under the rug in favor of self-aggrandizing agenda-setting, and, in doing so, engenders critical supply risks and the potential for further environmental degradation.

Widely ignored, although gaining attention, is China’s strategic positioning as a crucial gatekeeper to several key “green” technologies, including battery energy storage to support electric vehicles (EVs)—specifically, battery electric vehicles (BEVs)—along with stationary storage for power grids. China also dominates in other technologies including wind and solar components, controls, sensors, and communications—a gamut of industrial equipment, including much that is pertinent for defense.

While Russia holds significant leverage in influencing oil and gas prices, it pales in comparison to China’s position in several strategic industries critical to the energy transition, says report author Michelle Michot Foss, fellow in energy and materials at the Baker Institute.

Nickel is critical to battery-powered vehicles; nickel sulfate is a key ingredient in cathode precursors for the lithium-ion batteries they use. Indonesia is home to the largest nickel reserves in the world, and the privately owned Tsingshan Holding Group has made significant investments in the country.

(The report notes that on 8 March 2022, the London Metals Exchange (LME) abruptly halted trading in nickel, which had reached $100,000 per tonne. The LME events were a consequence of positions taken by Tsingshan based on expectations of falling prices. Russia’s invasion of Ukraine and other recent developments, not least post-pandemic recovery, undermined Tsingshan’s short position, forcing the company to purchase nickel at increasing prices to cover the positions, and the LME to increase margin requirements for market participants. The extreme disruption in nickel trading and markets, while unusual, is an important signal for materials insecurities that lie ahead, the authors said. )

Between 2010 and 2021, worldwide nickel usage grew almost 90%. This surge occurred mostly in China, driven by steel manufacturing. Batteries currently comprise about 7% of nickel demand, but this could increase to one-third of nickel consumption by 2040, which could create a disruptive supply chain environment for the US, according to the report. 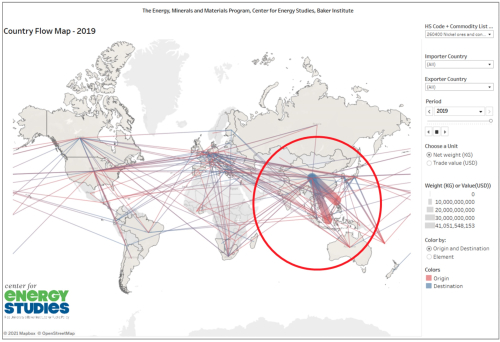 China’s status as a battery gatekeeper—along with its stationary storage capabilities in power grids and its emergence as the “factory to the world” on energy, non-fuel minerals and other key commodities—presents major challenges according to Foss. Its model of economic “soft power” has crept into commodity warehouses, EV factories and everything in between, giving Chinese entities significant control over several links of these critical supply chains.

Government incentives can boost electric vehicle sales in the US, she said, but policies to incentivize EV adoption will still be disrupted by inadequate infrastructure. The US faces a number of problems, including unstable raw material supply chains, insufficient battery manufacturing capacity and a lack of infrastructure to power EVs or supplement intermittent supplies of wind and solar power.

There are also unanswered questions about how to even finance electrification or road construction and maintenance given lost revenues from fuels taxes, Foss said.

In an era of unparalleled geopolitical friction, how China’s dominance will affect emissions reduction goals in places like the United States and Europe remains to be seen. … Thus, the success of EVs, much less anything else in the energy transition hopper, cannot be divorced from the geopolitics of the day. China’s inordinate influence over natural resource-producing and -exporting countries could translate to leverage in its revisionist power plays.

Accompanying the vigorous drive toward alternative energy technologies is the unavoidable pressure on the global supply of critical base metals. Nickel is no exception. In our report and case study we examine tensions in nickel supply and value chains within the context of broad aspirations to electrify transport.