Two private bus companies from Bavaria—Busreisen Ettenhuber GmbH and Martin Geldhauser GmbH & Co KG.—have ordered a total of 10 Solaris Urbino 12 hydrogen buses. 5 Urbino 12 hydrogen buses have been ordered by the carrier Busreisen Ettenhuber GmbH, and another 5 units will head to the bus company Martin Geldhauser GmbH & Co. KG. The deliveries are slated to be completed by March 2023. 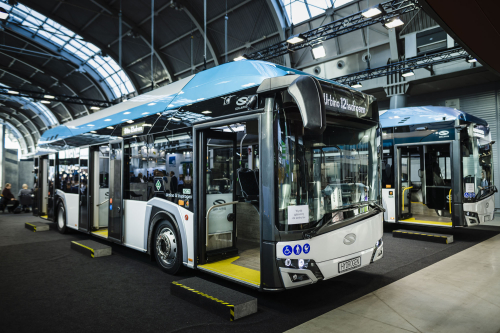 The vehicles will feature similar technical specifications. The drive unit will consist of an axle with integrated electric motors. A set of 70 kW fuel cells will be installed in each bus. The hydrogen will be stored in five tanks with a total volume of 1560 liters.

The buses will be capable of covering at least 350 km on a single refill. These hydrogen-powered Solaris buses will also feature a relatively small Solaris High Power traction battery, whose role is to support the fuel cell at moments of increased demand for electricity.

The buses will carry up to 34 seated passengers each. The vehicles will be equipped with the MobilEye Shield+ system, which helps to monitor the vehicle’s blind spot. If a pedestrian or a cyclist is detected in the blind spot, the system will warn the driver about it using both audible and light signals. The MobilEye Shield+ will also support the driver with its additional functionalities, such as traffic sign recognition, lane departure warning alerts and a passive braking assistant.

Along with the buses, the carriers will also receive a remote diagnostics system called eSConnect, developed by Solaris. It will allow them to optimize the fleet’s operation by increasing its availability and the limiting downtime of the buses, as well as by preventing any unnecessary drives back to the bus depot.

The partnership between Solaris and each of the operators dates back to 2004. Since then, the manufacturer has delivered 112 buses to Ettenhuber and 55 buses to Geldhauser. The companies are now opening up a new chapter related to the deployment of hydrogen technology.

Im glad to see people interrested to buy hydrogen. They don't say how they gonna get their hydrogen, i guess it will be electrolizers with excess wind or solar.