BASF has launched UpCore, a new service providing a cost-effective and sustainable technology upgrade from a standard ozone converter to an ozone-VOC (volatile organic compounds) converter for cleaner and healthier aircraft cabin air.

UpCore replaces the catalyst core of an ozone-only converter with an ozone-VOC catalyst, a sustainable solution as the original converter’s housing is reused. The dual-function technology catalytically removes VOCs from the cabin air while maintaining BASF’s industry leading ozone-removal performance.

The air at high altitude contains significant levels of ozone. 50% of the cabin air enters the aircraft from outside through the engines (“bleed air”) and if left untreated, ozone exposure can cause adverse health effects including headaches, fatigue, shortness of breath, chest pains, coughing, and irritation of eyes, nose or throat. 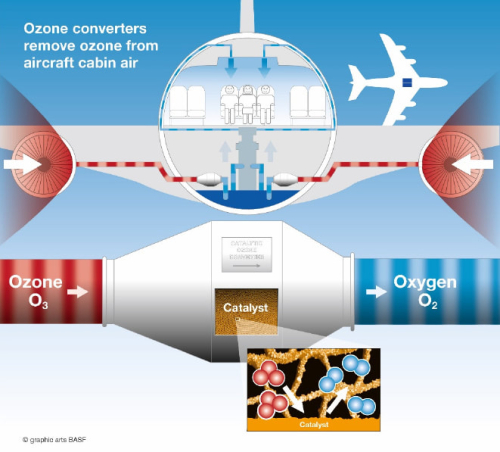 Odor causing VOCs such as jet fuel smell and odorous organic acids can enter the cabin from exhaust fumes, engine oil and hydraulic leaks, as well as de-icing fluid ingestion. These odors can result in crew and passenger discomfort or even fume events causing aircraft diversions and delays.

A vendor service bulletin for UpCore, fully approved by Airbus for the Airbus A320 series, will be issued shortly. The UpCore service does not need Supplemental Type Certificates (STC) or Designated Engineering Representatives (DER), as it is based on the same technology that has been proven for more than 15 years. It is fully compliant with OEM standards and resets converter performance to that of a new one while retaining the OEM part number. It also meets leasing companies’ requirements for OEM equipment used on their aircrafts.