The LA Department of Transportation (LADOT) launched its Universal Basic Mobility (UBM) Pilot in South Los Angeles—one of the largest programs of its kind in the country, increasing access to transportation options for thousands of Angelenos. The pilot will bring e-bikes, shared EV cars and on-demand EV shuttle service, in addition to a partnership with the Los Angeles County Metropolitan Transportation Authority (METRO) to subsidize transit fares for 2000 pilot area residents who have historically lacked options for how to get to where they need to go safely.

University Basic Mobility is a concept that believes that robust transportation options are essential to opportunity. Without mobility people cannot access basic needs such as education, employment, housing, and healthcare. For example, in Los Angeles today, there are twelve times more jobs accessible in one hour by car than by transit.

The Pilot is currently supported by $17.8 million in state and city funding. The California Air Resources Board (CARB) recently announced that LADOT would be awarded $6.7 million in additional funding from California Climate Investments (CCI) for its pilot, complementing $7 million in funding the department received from the Board last year. Earlier this year, the Los Angeles City Council voted to approve $4 million to expand transit subsidies and other program elements.

LADOT’s grant application to CARB was drafted with the input of a coalition of South LA community groups represented by the South Los Angeles Transit Empowerment Zone (SLATE-Z).

The Universal Basic Mobility pilot covers a large swath of South Los Angeles, bounded by the 10 Freeway to the north, South Alameda Street to the east, Crenshaw Boulevard to the west, and Florence Avenue to the South. All of the project area qualifies as either an SB 535 Disadvantaged Community or an AB 1550 Low-Income Community; the vast majority of the area qualifies under both. The majority of residents are people of color with two-thirds Hispanic and a quarter African-American.

More than 6% of households reported owning no vehicle and 30% own one vehicle. 6.7% of workers in the area walk or bike to work and 14.3% take transit to work. 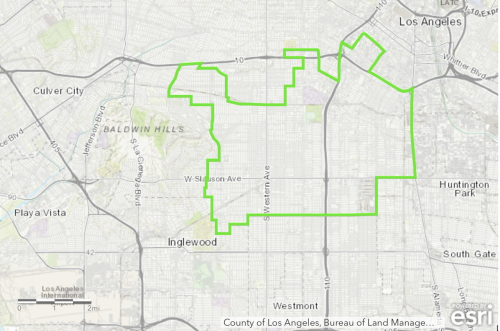