The Japan Atomic Energy Agency (JAEA), a national research and development agency, and Mitsubishi Heavy Industries, Ltd. (MHI), have been contracted by Japan’s Agency for Natural Resources and Energy, part of the Ministry of Economy, Trade and Industry (METI), to conduct a Hydrogen Production Demonstration Project Utilizing Very High Temperature, and from this fiscal year initiated a program to produce hydrogen using a High Temperature Engineering Test Reactor (HTTR). 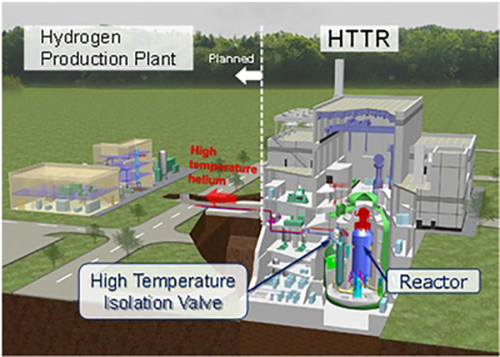 The determination of specific renovations necessary to connect the hydrogen production plant, along with the licensing procedure, equipment modifications, and testing, will be conducted in stages.

Background. Japan’s Strategic Energy Plan (Cabinet approval in October 2021) sets as a policy the establishment of elemental technologies for hydrogen production using high temperature gas-cooled reactors. In addition, the Green Growth Strategy Through Achieving Carbon Neutrality in 2050 (formulated in June 2021) sets as a policy the development by 2030 of technologies necessary to produce large-scale, low cost, carbon-free hydrogen by utilizing HTTRs, which have achieved world record-high temperatures.

In accordance with these national policies, on 8 February 2022, the Agency for Natural Resources and Energy, part of the Ministry of Economy, Trade and Industry (METI), began accepting bids for its Hydrogen Production Demonstration Project Utilizing Very High Temperature. A consortium comprising JAEA, which is capable of conducting tests using an HTTR, and MHI, which is evaluating technology for hydrogen production using high temperature gas-cooled reactors, was selected as the consignee for this project.

JAEA began research and development of high temperature gas-cooled reactors for the multi-purpose use of nuclear / thermal energy in 1969. The latest product of these long-running efforts is the recently completed High Temperature Engineering Test Reactor (HTTR). MHI headed the design and construction group of this project and has developed software technologies to verify the performance and integrity of the reactor core and other high temperature structures as well as hardware technologies such as manufacturing high-temperature structures and heat exchangers.

I hope gold hydrogen will be released before 2030. Nuclear progresses are too slow in my view. I guess battery will win because it is already popular so i gonna keep my gasser for when it will not work anymore, but i reserve the right to command throu this website the right to order a hydrogen car and a hydrogen infrastructure. I hope companies are reading this blog website. Since blog site exist, it's the consumer that have the power to influence the market and actually im not a buyer of anything.

The prices for most BEVs are still too high and will take time to reach parity with ICEVs. This will come in time as the development of traction batteries progresses.
Perhaps someday a NaS battery will be created and because of the low materials cost this will result in a significant reduction in the price of BEVs.

If you are going to make green hydrogen, this is the most efficient method as it does not require any electric power if the temperature is high enough (>950 C). The first use should be to replace the steam reformed natural gas hydrogen that is now used to make ammonia and other industrial chemical uses.

@Lad: The cost of the Ford EV F-150 truck is only a few thousand $ more than the ICE version. I think that the lower cost of fuel and maintenance will allow the user to quickly offset the price difference. This is why they have a 200,000 backlog of orders. GM also has a backlog of more than 140,000 orders for their EV pickup. although it is still more than a year out.

It is my firm and concrete conviction that H2 is the last straw to which the oil industry is clinging to retain their cash cows. Should they succeed, they'll return immediately to "the same procedure as - every year / opportunity allows".
An intriguing statement issued from Quantumscape is that their patented technological platform of their solid state variant is also applicable to other chemistries.
Undoubtedly, Quantumscape's solution is presently unparalleled; the same can be said of GMG's aluminum - graphene version with charging times 60 to 70 times faster than Li-ion.
What is even more interesting is that GMG has contracted with Bosch to scale up their coin cell for mass production to sizes suited for BEV applications. It is only recently that VW - partnering with Quantumscape - also closed a contract with Bosch.

@ yoatmon
It is my firm and concrete conviction - based on an overwhelming body of facts, that you are dead wrong.

@ Jakob Sperling:
The "overwhelming bodies of facts" that you are referring to are nothing more than deceased and evil smelling corpses caused by big oil.