Paris transport operator RATP has temporarily withdrawn Bolloré brand electric buses from operation after two separate bus fires. On Friday, 29 April, a fire broke out on a bus on line 71, towards the Bibliothèque François Mitterrand stop (Paris, 13th arrondissement). The bus driver immediately evacuated the passengers. There are no injuries.

Firefighters responded very quickly and as a safety measure, the François Mitterrand Library station, located nearby, was closed from 9 a.m. to 11 a.m.

An investigation is underway to determine the causes of the incident. As this was the second fire on an electric bus of the same Bluebus 5SE series of the Bolloré brand in less than a month, the RATP has made the decision as a precautionary measure, in liaison with Ile-de-France Mobilités, to withdraw from operation the 149 electric buses in this series.

RATP has asked Bolloré to explain the causes of these incidents and propose an action plan to allow these buses to be put back into operation in complete safety.

RATP noted that the temporary withdrawal of these buses could cause disruptions on some bus lines during the day. To limit these disturbances, buses will be redispatched between the different bus centers.

RATP has been operating electric buses since 2016 without major incident. The company operates a fleet of 4,700 buses, including 500 electric buses from 3 different manufacturers. 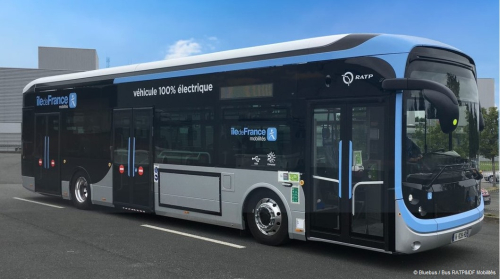 Each 12-meter Bluebus is equipped with six solid-state LMP (Lithium Metal Polymer) battery packs, a technology combining high energy density and optimal safety, providing up to 320 kilometers drive, according to the producer.

This technology has been developed within the Bollorè group by Blue Solutions, and is being adopted by Daimler on the eCitaro as well. These batteries are entirely produced in the Bolloré plants located in Brittany.