Faulty car windows often go in the recycling bin when the cracked part cannot be fixed. A closed material circuit does not yet exist for damaged car glass. This is where Audi and its partner companies Reiling Glas Recycling, Saint-Gobain Glass, and Saint-Gobain Sekurit are now doing pioneering work as part of a joint pilot project. 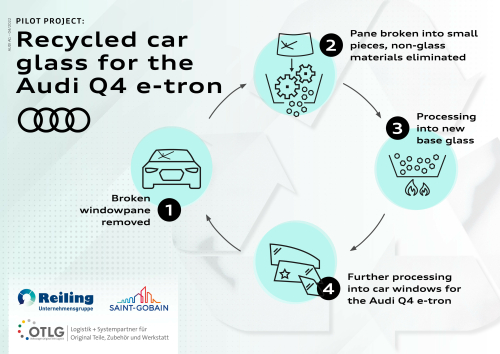 The partner companies want to turn the damaged auto glass into recyclable material for model production and have drawn up a multi-stage process for that purpose. Using an innovative recycling process, the car windows are first broken into small pieces. Then all the non-glass impurities such as glue residue are eliminated. The resulting glass granulate is melted down and turned into new plate glass. That plate glass is then turned into a new car window. If this pilot is successful, the windows that are produced this way will be used in models in the Audi Q4 e-tron series in the future.

The glass recycling pilot project starts with selected dealerships in the Volkswagen Group’s retail network. Customers whose cars have a damaged window set up appointments there. The retail partner checks to see if the window can be repaired. If it cannot, the window is replaced. The broken pane is delivered to Volkswagen’s Original Teile Logistik GmbH & Co. KG. This Volkswagen subsidiary organizes the disposal of parts that are no longer needed from Volkswagen AG workshops. Service partners remove car windowpanes from that process for recycling.

In the next step, the damaged windowpanes are delivered to Reiling Glas Recycling. There, they are first broken up into small pieces and processed. In the process, Reiling puts the old car glazing back into plate glass production for the first time.

The company sorts out non-glass materials such as PVB (polyvinyl butyral) plastic layers in the glass, window edgings, metals, and wires, such as heating filament and antenna cables. The elimination process is carried out using magnets, non-ferrous metal separators, extraction units, and electro-optical sorting units. In the future, such PVB layers are also meant to be introduced into a vehicle circuit.

In the next recycling step after the glass recyclate has been processed and all possible waste materials have been removed, Saint-Gobain Glass turns it into plate glass in Herzogenrath, Germany. To do that, the glass granulate is initially segregated by type for clear verification of source and color and then stored in bins. Producing new base glass requires the purest, most homogeneous glass recyclate possible.

Saint-Gobain Glass then mixes the recyclate with, among other things, quartz sand, sodium carbonate, and chalk—the basic components of glass. At the moment, the proportion of recylate to other materials varies between 30 and 50%.

The target for the pilot project with Audi is about 40 tons of recycled car glass.

The plate glass is first processed into rectangles of about 3 x 6 meters (10 x 20 feet) each. After that, the affiliated company Saint-Gobain Sekurit produces automotive glass through an additional process.

Beyond the pilot project with Audi, Saint-Gobain Glass plans to put up to 30,000 tons of shards into production in Herzogenrath within the next three years, which will save a considerable amount of energy and natural resources and reduce carbon emissions and water use. That will mean that the company will emit up to 75 tons less CO₂ from a typical day’s tonnage.

The three partner companies have decided to put the process to an initial one-year test so that they can learn about material quality, stability, and costs. If glass can be recycled in an economical and an ecologically meaningful way, car windows made from secondary materials will be used in the Audi Q4 e-tron series.