Russia-based Nornickel, the world’s largest producer of palladium and high-grade nickel and a major producer of platinum and copper, has entered into a cooperation agreement with the Russian State Atomic Energy Corporation Rosatom (Rosatom). The parties agreed to cooperate in several areas.

First, the parties intend to deliver strategic projects in the Russian Arctic in a bid to develop the infrastructure of the Northern Sea Route, Arctic shipping, including the implementation of shipbuilding projects and the development of the nuclear icebreaker fleet. 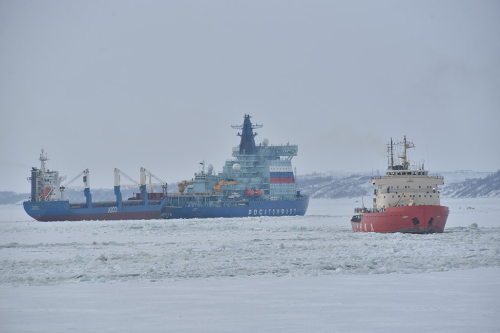 The nuclear-powered icebreaker Sibir and the port icebreaker Dudinka.

Atomflot’s icebreakers help Nornickel expand the transport corridor to the Taimyr Peninsula, allowing it to support its investment program in the Norilsk Industrial District. For example, since 2022, the Sibir nuclear-powered icebreaker has been providing year-round navigation on the Murmansk-Dudinka line and is operating in the Yenisey Bay, ensuring commercial speed of piloting.

Joint projects may also include the development of the Kolmozerskoye lithium deposit in the Murmansk region and further deep processing of lithium raw materials.

Kolmozerskoye is the largest (18.9% of Russian reserves) and most promising untapped Russian lithium ore deposit and is currently unallocated. The parties will consider setting up a joint venture with stakes and parity principles of corporate governance. Such JV would combine the assets and competencies of the partners and participate in the Kolmozerskoye licence auction.

This would give Russia the opportunity to start its own lithium industry and production of lithium-ion batteries. The country does not currently mine lithium.

Nornickel’s products have long played an important role in energy storage. By expanding our range of metals with such an important and sought-after raw material as lithium, we intend to strengthen our position as a key supplier to the battery industry. And cooperation between Rosatom and Nornickel will allow the Russian industry to take a step forward in developing its own production of efficient modern batteries.

Lithium mining would help set up the first domestic production of lithium-containing products, as well as the production of lithium-ion traction batteries. Thus, by complementing each other’s capabilities and assets, cooperation between Rosatom and Nornickel will accelerate the construction of a full-cycle energy storage industry.

An auction for the rights to the Kolmozerskoye lithium deposit in Russia’s Murmansk region is due to take place in Q3 2022, with a starting price of tentatively 310 million rubles (US$4.26 million), Natural Resources Minister Alexander Kozlov told Interfax. The deposit contains niobium, tantalum and beryllium besides lithium. The Natural Resources Ministry has put it up for auction but no interested parties could be found due to the hefty starting price, the ministry said this year.

Rosatom’s Atomredmetzoloto or ARMZ, which mines uranium, said at the start of this year that it was choosing a pilot field to launch a lithium project in 2022.