The demonstrator is based on a Euro 6d C-segment car. The vehicle powertrain consists of a turbocharged 4-cylinder, 1.5 liter gasoline engine with direct injection and a peak power of 110 kW, equipped with variable valve timing and cylinder deactivation. The powertrain includes a 48 V mild-hybrid system in P0 configuration (belt starter-generator, up to 9 kW as motor, 12 kW as generator). 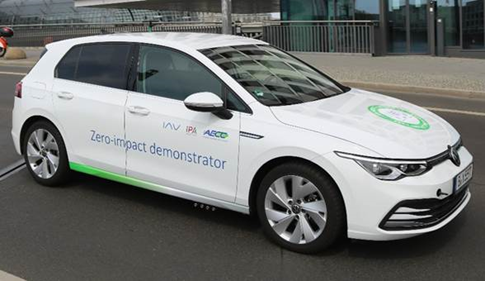 A testing program was co-funded by the International Platinum Group Metals Association (IPA), and undertaken at engineering company IAV in Berlin, Germany. E-fuel testing was conducted together with Aramco Overseas Company.

An RDE test for cold-start was conducted down to -10 °C, showing the smart combination of technologies significantly reduces the initial cold-start peak for gaseous pollutants compared to the already low Euro 6d levels. Values of 3-10 mg/km were measured at the tailpipe, significantly below the Euro 6 limit of 60 mg/km.

Near-zero emissions are achieved within the first kilometer of driving, and maintained during all subsequent kilometers, independent of the testing conditions.

These ultra-low results are also achieved for other species, e.g., ultrafine particles and ammonia. The PN10 level was between 109 and 1010 particles/km—similar to particle concentration in ambient air. There is an initial cold-start effect, impacted by ambient temperature, driving style and initial filter status.

AECC said that at a time when the future of internal combustion engine vehicles is being discussed, these results clearly show that it is possible to continue to reduce combustion engine emissions to zero-impact levels. The data has been made available to the Euro 7 process and AGVES working group.