Hyundai, Motional to deploy Level 4 IONIQ 5 robotaxis in US in 2023

Hyundai Motor Company launched a global manifesto campaign called ‘Innovation Begins, from Very Human Things’ to share its vision for self-driving robotaxis. Motional, formed in March 2020 as an autonomous driving joint venture between Hyundai Motor Group and Aptiv, will work in partnership with ride-hailing services to deploy the Level 4 autonomous vehicles starting in 2023.

Hyundai and Motional plan to begin transporting public passengers in the IONIQ 5 robotaxi first in Las Vegas and then expanding to major cities in the US and globally. 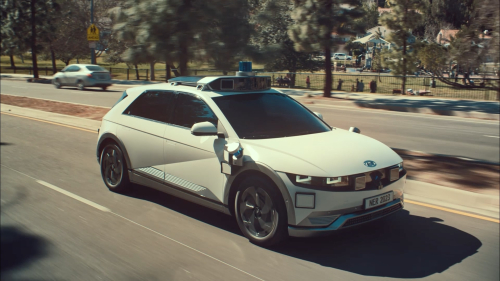 The all-electric IONIQ 5 robotaxi was first unveiled at 2021 IAA Mobility. The IONIQ 5 robotaxi is also Motional’s first commercial vehicle and signals a pivotal milestone in the company’s roadmap.

The IONIQ 5 robotaxi features a technology-driven design that showcases the innovation behind the autonomous operation. The vehicle’s sensor suite is prominently displayed across the exterior, easily distinguishing the robotaxi from human-piloted vehicles. The robotaxi has more than 30 sensors—a combination of cameras, radars, and lidar—that provide robust 360-degree perception, high-resolution images, and ultra-long range detection of objects for safe autonomous operation in diverse driving environments.

The robotaxi will be outfitted with Motional’s driverless technology, which includes advanced machine learning systems trained on decades of real world data that enables the vehicle to safely navigate challenging and complex driving situations.

Based on the Electric Global Modular Platform (E-GMP), Hyundai Motor Group’s dedicated battery electric vehicle (BEV) platform, the IONIQ 5 robotaxi’s interior provides passengers with a spacious, comfortable place to work, relax, or socialize during their driverless ride. The interior will also feature a suite of rider-focused interfaces to allow passengers to interact with the vehicle during their ride, such as directing the robotaxi to make an extra stop.

There are safety redundancies across every function, such as the navigation, steering, braking, and power, for a safe and smooth ride every time. Motional will also be able to provide Remote Vehicle Assistance (RVA) to the IONIQ 5 robotaxis should they encounter an unusual road scenario, such as road construction or flooding. In such an event, a remote Motional operator could instantly connect to the vehicle and direct it to a new path.

In line with Hyundai’s brand vision of ‘Progress for Humanity,’ the company’s aim for the robotaxi is to go fully autonomous while retaining a humanistic touch. This narrative is depicted through two videos of the recently launched campaign.

The two campaign videos emphasize the humanistic qualities of robotaxis, showing how they adopt safe driving behaviors and care for passengers. The first episode emphasizes the robotaxi’s actions resembling those of a careful, considerate driver and the second episode focuses on the robotaxi taking care of passengers from teenagers to disabled and elderly.