The lithium industry needs $42 billion of investment if it is to meet 2030 demand, according to analysis by Benchmark Mineral Intelligence. This works out at approximately $7 billion a year between now and 2028 if the industry is to meet lithium demand by the end of the decade. 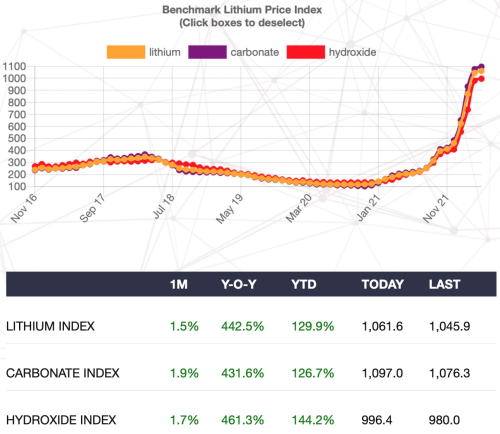 As such, Benchmark will now move from bi-monthly to weekly publication of its Chinese lithium prices. Benchmark now publishes weekly prices for:

By 2030, there will also be a deficit of 230,000 tonnes of refined nickel, as assessed by Benchmark’s Nickel Forecast. In 2021, a third of global refined nickel supply came from Indonesia and this is forecast to 50% in 2025. However, the carbon footprint of Indonesian nickel can be much higher than other supply chain routes according to Bruna Grossl, a life Cycle assessment (LCA) practitioner at Benchmark.

Car companies are finally catching on to the great raw material disconnect.

Hopefully, EV consumer demand will keep up with such expectations. There are only so many government and corporate fleets, single-family homes, and dedicated multi-family home hook-ups to make this expensive, electric transition convenient. I doubt that the majority of the US, asia, and non-EU european countries will legislate or effectively tax EV full-purchase/ sale/ use compliance. Also, electrical capacity and distribution networks outside of the G7 are unlikely to be upgraded or support off-the-grid electric production. This early EV numbers take-up will possibly plateau slightly higher until past the late 2020s.