Canada-based battery materials company Euro Manganese (EMN) reported that the first shipment of the components of its demonstration plant to be sited in Chvaletice, Czech Republic is underway from China, where the components of the plant are being assembled.

The first consignment was shipped on 30 April 2022 and the final consignment is expected to be shipped in the coming weeks. Both shipments are being made by ocean freight from China, a change from rail, due to the Russia-Ukraine conflict.

The demonstration plant is designed to produce large-scale samples of high-purity manganese products for use in the supply chain qualification process of the company’s products. Approximately 55% of the first year’s production has been allocated to five prospective customers who have signed non-binding memoranda of understanding (MOUs) with EMN.

Located approximately 90 km east of Prague in the Czech Republic, the Chvaletice Manganese Project entails re-processing a significant manganese deposit contained in waste (tailings) from a decommissioned mine that operated between 1951 and 1975. The Chvaletice resource is the only sizeable, classified resource of manganese in the European Union.

​ Chvaletice is not a mining project. It is a unique and innovative waste recycling initiative that avoids the negative impacts of traditional hard rock mining. As the project recycles historic mine tailings, it will clean up the contaminated site and eliminate a longstanding source of water pollution.

Background. The presence of manganese and iron minerals was first recorded near present-day Chvaletice in the 1800s, and sporadic, localized mining of the Chvaletice ore body took place during the early 1900s. Starting in the 1930s, ore was processed for the recovery of manganese and shipped by rail to steel mills in Czechoslovakia and Germany. Between 1951 and 1975, the focus turned to the extraction of pyrite, which was used to produce sulfuric acid for various industrial clients. The waste from these operations created the three existing tailings piles that form the Chvaletice deposit. 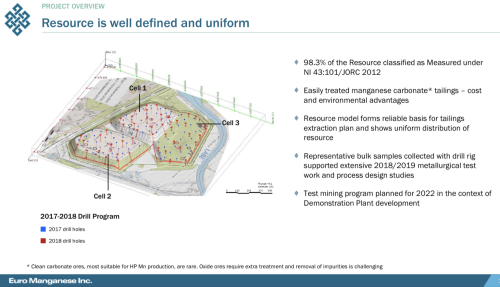 The deposit contains finely milled, unconsolidated tailings placed above ground, which are expected to result in very low mining and virtually zero ore dressing costs. Approximately, 80% of manganese is contained in leachable manganese carbonate minerals that require no calcination, unlike manganese oxide ore.

In the late 1980s, Bateria Slany—a Czechoslovakian state-owned battery producer—undertook extensive studies of the tailings to determine the feasibility of producing manganese dioxide for the production of dry cell batteries. Although Bateria Slany confirmed the presence of a significant and economically attractive manganese carbonate resource, it halted development following the political regime change that was initiated in 1989, which brought about the end of communism in Czechoslovakia and the establishment of an independent Czech Republic. The deposit lay dormant until its mineral rights were granted in September 2014 to a Czech group of companies. The rights to the Project were then consolidated to form a jointly-owned holding company, Mangan Chvaletice s.r.o.

In May 2016, Euro Manganese Inc. acquired 100% of Mangan Chvaletice s.r.o., the Czech company that holds the exploration rights to the Chvaletice manganese deposit.