VERBIO recently officially launched the first cellulosic RNG plant in the US. The VERBIO Nevada (Iowa) Biorefinery began producing renewable natural gas (RNG) on an industrial scale in December 2021. The facility is on track to achieve full-scale production of 7 million ethanol gallons equivalent (EGE) of RNG annually by mid-summer 2022. 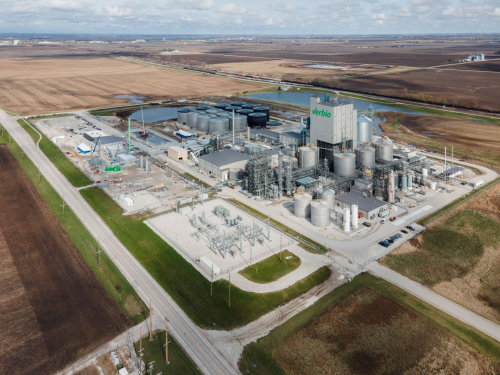 In early 2023, the site will begin operating as a biorefinery, producing 19 million EGE of RNG and 60 million gallons of corn-based ethanol, annually. The integration of RNG and ethanol production, unique to VERBIO, incorporates advanced operational technology to build on the company’s successful experiences in Europe.

Collaboration between VERBIO and Alliant Energy led to the opening of the facility, which Alliant Energy serves with both natural gas and electric service. Renewable natural gas from the VERBIO Nevada Biorefinery is injected into an Alliant Energy pipeline before being distributed across the country.

Alliant Energy delivers the energy from the production at the facility to its natural gas customers in Iowa. Further, the company helped to develop standards and regulations for RNG as well as constructed interconnection options for the site, allowing VERBIO to comply with requirements established for the sale of RNG in other states.

VERBIO announced this is a “good start“ as the RNG production from this first plant will equal 3.3% of total US production last year, but there are still opportunities for growth. While the Renewable Fuel Standard (RFS) has been a great success, the portion from the Advanced Biofuels category related to Cellulosic Biofuels, including RNG, has greatly underperformed.

By 2022, the RFS envisioned 16 billion gallons of advanced biofuels. However, production to date has not exceeded 0.6 billion gallons, less than 4%. VERBIO sees its mission as working with all relevant parties to close this gap as quickly as possible.

Today, there are more than 200 ethanol plants operating in the US that could benefit from the efficiencies offered by VERBIO’s operating technology. The company expects to be operating 5-10 biorefineries within the next five years, producing 15-30% or more of the total RNG produced in 2021.

The plant in Nevada (Iowa) is our first plant in the USA. Until summer 2022, we will achieve full-scale production. Then we will process up to 100,000 tons of corn stover into renewable natural gas (RNG) every year and make it available for the market as a climate-friendly, renewable biofuel. By 2023, we will expand the VERBIO biorefinery based on the model of the German plants to an integrated RNG and bioethanol production. Our advanced and approved technology sets new standards in the US biofuels market. Nevada is just the beginning. We want to install another five to ten biorefineries in North America over the next five years.

VERBIO Vereinigte BioEnergie AG is one of the leading independent bioenergy manufacturers, and is also the only large-scale producer of biodiesel, bioethanol and biomethane in Europe. The Group has approximately 900 employees at its locations in Germany, India, the USA, Canada, Poland, and Hungary. VERBIO concentrates on the use of internally developed innovative and efficient energy-saving production processes. VERBIO’s biofuels achieve CO2savings of up to 90% compared to gasoline or diesel.

VERBIO North America Holdings Corporation (VNAH), with headquarters in Livonia, Michigan, is developing and will own, operate and finance multiple RNG and ethanol plants in the United States using VERBIO’s technology and financing. RNG produced by VERBIO Nevada will be injected into the natural gas distribution/transmission system and sold to CNG/LNG filling stations or fleet operators for use as transportation fuel. Ethanol production is scheduled to become operational in the 1st Quarter 2023.

There should be as much biomass available as cobs, leaves and stalks as there is in kernels, yet the EtOH-equivalent production of RNG is less than 1/3 as much as the EtOH.  There appear to be some serious inefficiencies in the process.

@Engineer-Poet,
You have posted that “Biomethane is as much of a climate hazard as fossil methane“. Agreed, so why doesn’t VERBIO just convert the biomass to Bio-methanol?
A French company, ARM Engineering just broke a record taking a fuel cell Renault Zoe 2,000 km on a tank of Bio-methanol, they call G-H3 (https://www.byri.net/2022/05/12/a-fuel-cell-renault-zoe-drove-2000-km-without-recharging/ and https://arm-engineering.fr/ — use Google Translate).
What do you think?

Agreed, so why doesn’t VERBIO just convert the biomass to Bio-methanol?

It's wasteful to do auto-thermally, and I wouldn't be surprised if the terms of the "bio" or "R" designation require microbial conversion.


What do you think?

I think Google Translate failed utterly on the .fr site that it fed back to me, and 10 km/liter of MeOH isn't at all bad but is hardly impressive especially at 50 km/hr.  My 2013 Ford Fusion Energi could probably beat that handily if the engine was re-tuned for methanol fuel; it already beats 60 MPG at a steady 40 MPH, and it's 9 years old.

VERBIO uses a fermentation based process without recycling the CO2. If they used the Haldor Topsoe eSMR they could use the 40 percent CO2content which is separated and vented off ( https://www.rngcoalition.com/news/2019/7/23/haldor-topsoe-to-build-a-methanol-plant-making-biogas-upgrading-cost-effective).
The ARM Renault is a range extended ZOE EV using a 5 kW Methanol Fuel Cell. If you had a 20 gallon tank you could probably do 2000 km at 40 mph.

Forgot Conversion of methanol to gasoline - so 40 gallon tank.