A research team from Tokyo Tech has used an alumina-supported, iron-based compound to develop a catalyst that can efficiently convert CO2 into formic acid (HCOOH) with ~90% selectivity. An open-acess paper on the work is published in the journal Angewandte Chemie. 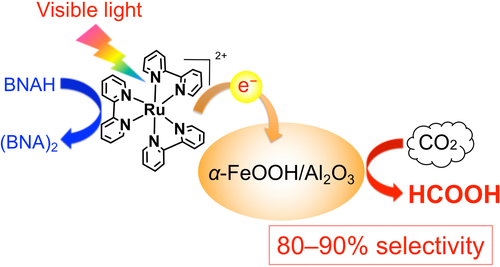 A wide-spread soil mineral, alpha-iron-(III) oxyhydroxide, was found to become a recyclable catalyst for carbon dioxide photoreduction into formic acid. The rising CO2 levels in our atmosphere and their contribution to global warming is now common news. As researchers experiment with different ways to battle this problem, one efficient solution has emerged—converting excess atmospheric CO2 into energy-rich chemicals.

Production of fuels such as formic acid by photoreduction of CO2 under sunlight has attracted a great deal of attention recently due to the two-fold benefit that can be gained from this process: it can reduce excess CO2 emissions, and also help minimize the energy shortage. An excellent carrier of hydrogen with high energy density, HCOOH can provide energy via combustion while releasing only water as a byproduct.

To turn this lucrative solution into reality, scientists developed photocatalytic systems that could reduce CO2 with the aid of sunlight. Such a system consists of a light-absorbing substrate (i.e., a photosensitizer) and a catalyst that can enable the multi-electron transfers required to reduce CO2 into HCOOH.

Solid catalysts were deemed the best candidates for this task, due to their efficiency and potential recyclability, and over the years, catalytic abilities of many cobalt, manganese, nickel, and iron-based metal-organic frameworks (MOFs) have been explored, with the latter having some advantages over other metals. However, most of the iron-based catalysts reported thus far only yield carbon monoxide as the main product, instead of HCOOH.

We wanted to explore more abundant elements as catalysts in a CO2 photoreduction system. We need a solid catalyst that is active, recyclable, non-toxic, and inexpensive, which is why we chose a widespread soil mineral like goethite for our experiments.

The team adopted a simple impregnation method to synthesize their catalyst. The researchers then used the iron-loaded Al2O3 material for photocatalytic reduction of CO2 at room temperature in the presence of a ruthenium-based (Ru) photosensitizer, an electron donor, and visible light of wavelength over 400 nm.

The system showed 80-90% selectivity towards the main product, HCOOH, and a quantum yield of 4.3% (which indicates the system’s efficiency).