Electreon, a provider of wireless and in-road electric vehicle (EV) charging technology, signed an agreement of cooperation with Israel public transportation company Electra Afikim. As part of the agreement, Electreon will provide Electra Afikim with wireless charging infrastructure that will enable simultaneous charging of 30 buses, 24 hours a day.

The deal is a result of a call for proposals issued by Israel’s National Public Transportation Authority in the Ministry of Transportation to public transport operators, to procure and establish infrastructure to electrify buses. The ministry was a partner in arranging the parking lot for electric charging with the Rosh HaAyin municipality, and invested about $2.9 million in the project. 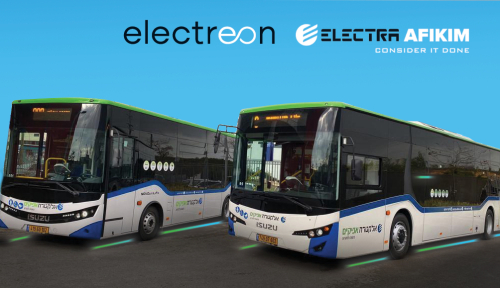 As part of the agreement Electreon will provide maintenance, support and operation services for the next 12 years. The cost of the deal is $1.9 million; it will cover the fleet’s activity, and includes 30 buses. In addition, Electra Afikim will bear the cost of the electricity. Electra Afikim is the fourth-largest bus operator in Israel with roughly 1,400 buses. The municipality of Rosh Hain played a key role in the agreement as part of it policy to promote clean electric transportation in the rapidly growing city.

This is the second commercial deal signed by Electreon in Israel. The previous, with Dan bus company in October 2021, included the sale of wireless charging services for 200 buses. The company estimates that the Electra Afikim agreement has potential for future expansion, including a significant chance of replication with other operators from Israel and abroad.

The deal was done in accordance with the Ministry of Transportation's decision to change the face of public transportation in Israel, as part of its ban on the introduction of polluting buses from 2025.

Electreon’s activity in Israel is in line with the company’s business model, as part of its process to promote public transport operators and other commercial fleet operators in the US, Europe, Germany and France with Electreon’s strategic partner, the infrastructure company, Vinci.

Over the past weeks Electreon has announced several international deals including a development agreement for commercial wireless charging projects with Destia, Finland’s leading infrastructure services company. As part of the agreement the parties will promote commercial public charging projects in Finland, with trucks and wireless distribution vehicles.

2022 is Electreon’s year of transition from planning, development and construction of supply chains towards large-scale production and sales. The wireless static charging project signed with Electra Afikim is a model that the company intends to replicate in many cities around the world, along with dynamic wireless charging. Electreon continues to significantly increase its production capacity in order to be ready for the rapid construction of projects in the pipeline and future projects.