The number of gigafactories in the pipeline has surpassed 300; there is now 6,387.6 gigawatt hours (GWh) of lithium ion battery capacity in the pipeline as assessed in Benchmark Mineral Inelligence’s May 2022 Gigafactory Assessment—a 68% year-on-year increase.

China continues to dominate gigafactory announcements, but North America and Europe have seen significant growth over the past two years thanks in part to automaker and battery manufacturer joint ventures. 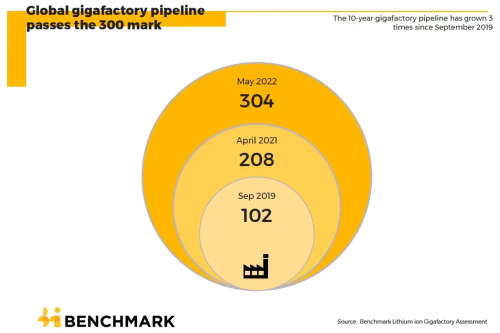 Joint ventures between automakers and battery companies have been central to this growth. In September 2019, just one of the five North American gigafactories tracked by Benchmark directly involved an automaker: Tesla’s Gigafactory 1 in Nevada. Now, 14 of the 23 North American gigafactories in the pipeline are wholly or jointly owned by automakers, representing 81% of the region’s capacity pipeline for 2031.

A third of the 30 European gigafactories assessed in May 2022 involved an automaker, representing 40% of the continent’s pipeline capacity, compared to just one of the 13 gigafactories in the September 2019 assessment.

China remains the dominant builder of gigafactories, with 226 due to be operational by the end of the decade, making up over 75% of all facilities tracked in Benchmark’s Gigafactory Assessment. 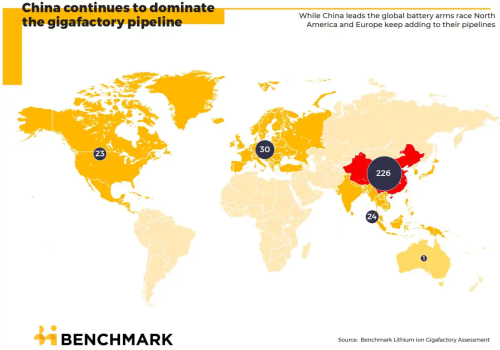 The 300th gigafactory added to Benchmark’s Gigafactory Assessment is being developed by Chinese cell manufacturer EVE Energy in Chengdu, Sichuan. The $3 billion plant will have a capacity of 50 GWh. Benchmark expects the first 20 GWh phase to be operational in 2026 and the full capacity to be online in 2029.

In 2031, China is set to have almost 4,500 GWh of gigafactory capacity, representing 70% of global capacity.