Nutrien to build world’s largest clean ammonia production facility; LOI with Mitsubishi for up to 40% offtake for fuel

Canada-based Nutrien Ltd. is evaluating Geismar, LA as the site to build the world’s largest clean ammonia facility. Building on the company’s expertise in low-carbon ammonia production, clean ammonia will be manufactured using innovative technology to achieve at least a 90% reduction in CO2 emissions.

The project will proceed to the front-end engineering design (FEED) phase, with a final investment decision expected to follow in 2023. If approved, construction of the approximately US$2-billion facility would begin in 2024 with full production expected by 2027.

At Geismar, Nutrien has already retrofitted a conventional ammonia plant to compress and sequester excess pure CO2, yielding the capability to produce about 200,000 tonnes of low-carbon ammonia annually. Geismar makes two grades of ammonia—conventional “gray ammonia” and low-carbon blue ammonia. The gray ammonia is primarily upgraded into urea which is then made into diesel exhaust fluid and urea ammonium nitrate. The low-carbon blue ammonia has a range of end-markets suitable for use in agriculture and other industries, such as a fuel or as a hydrogen carrier.

The new plant is expected to have an annual production capacity of 1.2 million metric tonnes of clean ammonia and capture at least 90% of CO2 emissions, permanently sequestering more than 1.8 million metric tonnes of CO2 in dedicated geological storage per annum. The new plant will use auto thermal reforming technology to achieve the lowest carbon footprint of any plant at this scale and has the potential to transition to net-zero emissions with future modifications. 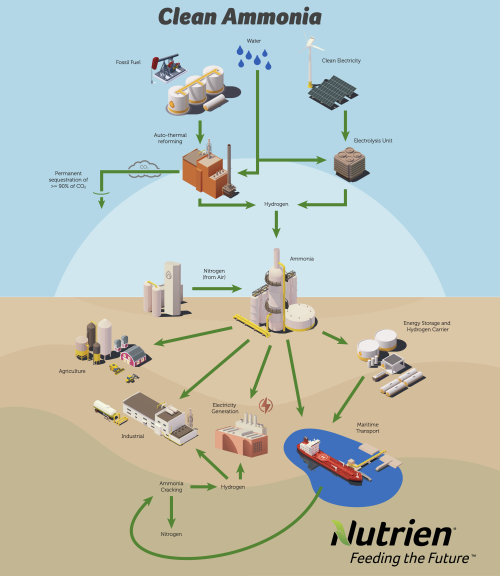 Nutrien has signed a term sheet with Denbury Inc., a trusted partner for nearly a decade, that would allow for expansion of the existing volume of carbon sequestration capability in the immediate vicinity of its Geismar facility, if selected as the final site of construction.

Nutrien has also signed a Letter of Intent to collaborate with Mitsubishi Corporation for offtake of up to 40% of expected production from the plant to deliver to the Asian fuel market, including Japan, once construction is complete.

Nutrien is committed to leading the development of low carbon and clean ammonia to rapidly accelerate the decarbonization of hard-to-abate sectors such as agriculture, industrial use of ammonia, power generation, and maritime fuel. As one of the world’s largest ammonia traders by marine transportation, Nutrien announced in 2021 a collaboration agreement with EXMAR to develop and build jointly one of the first low-carbon, ammonia-fueled maritime vessels to help decarbonize shipping.

Nutrien is also involved with the US Department of Energy and other partners to explore flexible clean ammonia production using air, water and variable renewable electricity.