The world’s first truck manufacturer to do so, Volvo is now introducing fossil-free steel in its trucks. The steel is produced by the Swedish steel company SSAB (earlier post) and the heavy-duty electric Volvo trucks will be the first to include it.

The steel from SSAB is produced using a new technology, based on hydrogen. The result is a much lower climate impact than conventionally produced steel. Small-scale introduction of the steel in Volvo’s heavy electric trucks will begin in the third quarter of 2022. 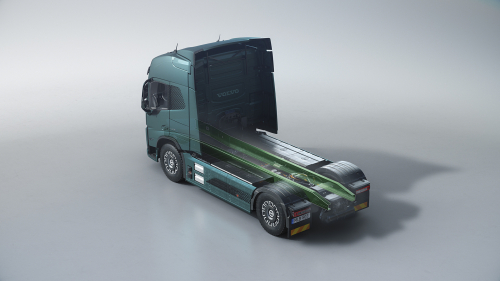 The steel will first be used in the truck’s frame rails.

We will increase the use of fossil-free materials in all our trucks to make them net-zero not only in operation—but also when it comes to the materials they are built of.

The first steel produced with hydrogen will be used in the truck’s frame rails, the backbone of the truck upon which all other main components are mounted. As the availability of fossil-free steel increases, it will also be introduced in other parts of the truck.

Today, around 30% of the materials in a new Volvo truck come from recycled materials; up to 90% of the truck can be recycled at the end of its life.

Someone explain in real-world terms how this can be widely duplicated outside of a region with cheap hydropower.

It doesn't matter.  Steel is an internationally-traded commodity; if steelmaking goes to Norway and Iceland, so much the better.

Of course, the source of the hydrogen doesn't matter either, so long as it's emissions-free.  One option is to build out nuclear power to meet both base-load and mid-load demands, and use the overnight surplus power to make hydrogen.  Decarbonizing steelmaking is just one use for that hydrogen.

I agree that the best way to make hydrogen is to use nuclear power and either high temperature electrolysis or even better direct high temperature hydrogen generation if we built high temperature reactors. However, I believe that there is a better way to make "green" steel. Boston Metals is working on direct electrolysis of molten iron ore. The output is pure molten iron and oxygen. The only other step is to add alloying agents and start rolling. No secondary purification or reheat is required. See: https://www.bostonmetal.com/ Not only is this green steel but it uses less overall energy and has lower capital costs. This is the real benefit of going green in a smart method. Not only green but it saves money. Save the green hydrogen for making ammonia, etc. but do make it using nuclear power.

Interesting tech, many thanks.

Digging around on it:

' Scale is important in the steel business, but so is being able to use capital-intensive systems that have already been built. Green hydrogen has a leg up on this front because it’s compatible with the direct reduction of iron process, which is already being used at commercial scale with natural gas. It’s relatively easy to swap out the natural gas for hydrogen. That’s why major steel producers such as SSAB and ArcelorMittal have focused on green hydrogen for their near-term plans.

“We’re on the clock here,” said Fan. ​“If we want to fully decarbonize by 2050, we need to think about production-unit replacement in the next 10 years or 20. If MOE is not commercially available at that time, it just missed the window.”'

Besides being compatible with existing equipment, hydrogen has the virtue of being storable over durations of weeks and months (given the proper geology) to be able to meet peak demands.  While a system based on nuclear CHP would easily meet peak heat demands within the hot-water service area, the areas too far-flung to be reached by the water pipes could be fueled by repurposed NG networks carrying H2.  The main problem will likely be re-engineering furnaces to be safe to operate with hydrogen fuel.  I've got some ideas for dealing with that.

A titbit on the roles of electrification and/or hydrogen and how it is playing out, although not specifically on steel production:

I was interested to spot that SoCal Gas is swapping its fleet to Mirai cars, not BEVs:

Basically, although of course being a company in industrial gasses rather than directly in electricity supply they are predisposed to be favourable to the tech, it is due to the range etc in some fleet use applications.

They also give an insight into how they think it pans out between electrification, assisting it with clean fuels, and carbon sequestration:

In their opinion a 4th alternative, electrification without clean fuels, comes in at an expensive $290 bn to decarbonise by 2045, with loads of obstacles.

Chucking in some clean fuels reduces the cost to $230bn, with for instance 5% hydrogen in pipelines, in their 'resilient electrification' scenario

Upping the clean fuels to 100% for long haul freight and 20% hydrogen in pipelines reduces the costs to what they think is the lowest cost, at $215bn.

Before folk comment that it is fossil fuel legacy interests at work, they don't much fancy carbon sequestration, giving the costs for that approach at $245bn.

In my view the three favoured scenarios are all pretty much margin of error stuff, with even the high carbon capture scenario probably heavily dependent on the assumptions made.

Of course, for those seeking to argue that CC is just a fossil fuel ploy, then it it were indeed fiddled figures then it would obviously be ineffective, like a lot of current pollution abatement legislation.

The overall takeaway for me though is that clean fuels to supplement electrification should not be dismissed, and we are looking pretty good for a variety of approaches and permutations.

So it was your leaving party that became a legend! :-0

To be more clear about the “Steel Story”. It was 1999, I had to train a group of executives and engineers for ISPAT Steel Mexico (today it is called Arcelor Mittal) in SAP software.
I did not know that Mexico was a major steel producer or who ISPAT was? There was no language barrier either, they all were from India. Worst, I did not even get a trip to Mexico.