Researchers at the Institute of Modern Physics (IMP) of the Chinese Academy of Sciences (CAS) have developed an innovative method of pre-enriching uranium in seawater by membrane filtration.

Uranium is the vital source for nuclear power generation. There are about 4.5 billion tons of uranium existing in seawater—1000 times more than terrestrial reserves. However, the extremely low uranium concentration and huge amounts of coexisting ions, especially K+, Na+, Ca2+ and Mg2+, makes the extraction of uranium from seawater very challenging. Thus, it is of great importance to enrich uranium and reduce the concentration difference between uranium and the main coexisting ions.

In a study published in Chemical Engineering Journal, the researchers at IMP report developing an effective method to pre-enrich uranium in seawater by membrane filtration, based on the prominent hydrated ion diameter differences between UO22+ and the main coexisting ions. 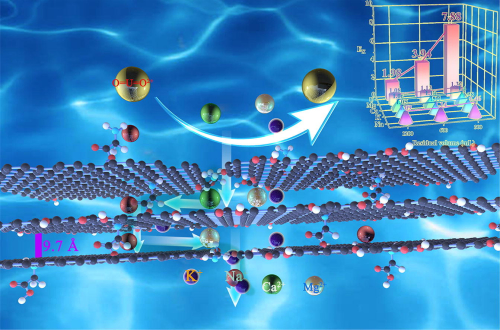 Researchers fabricated a new type of glycine cross-linked composite graphene oxide (GO-Gly) membrane with good ion-sieving properties, which can meet the demands of uranium pre-enrichment in seawater. The cross-linking of GO by glycine not only overcomes the swelling defect of GO membrane in solution, but also fulfills the requirement for the channel size of uranium separation from the main coexisting ions. Moreover, the structure of the membrane can keep stable when immersed in water solution for a long time.

The researchers investigated the ion rejection and enrichment properties of uranium and the main coexisting ions in single ion solutions and simulated seawater, respectively. They found that almost 100% of uranium was rejected by the GO-Gly membrane. In addition, only uranium was obviously enriched while the concentrations of the main coexisting ions kept nearly constant in continuously filtrating the simulated seawater with the membrane.

The results confirm that the GO-Gly membrane is a good candidate for uranium pre-enrichment in seawater. This new method combined with the traditional methods is expected to improve the uranium recovery efficiency greatly and to promote the real application of uranium resources in seawater.

The great thing about uranium from seawater is that cost is relatively unimportant.
Fuel costs are such a tiny fraction of total costs, with build and finance to cover absurdly cumbersome and restrictive 'safety' legislation, overwhelming.

And it is an effectively infinite resource on any human scale, as continental erosion replaces it with the dissolution of uranium in the continents renewing it from unminably low concentrations in typical rocks.

That is aside from the fact that rather better recycling can revolutionise the current 5% or so of the energy in the uranium that we currently use, as well as solving the waste 'problem'.

We have spent the last 60 years mining and polluting digging out coal, stopped by the fancied dangers of nuclear, contributing enormously to GHG emissions and bumping off hundreds of thousands of miners in this lethal industry.

@ Davemart:
Take a thorough look at this and you might change your opinion on nuclear fission.
https://newatlas.com/energy/hb11-laser-fusion-demonstration/

They noted that "the overall conversion efficiency of the process (laser to alpha particle energy) was still low," at about 0.005 percent

4.3 orders of magnitude from breakeven.  5.5 OOM from anything that could be seriously commercial.

I'll believe it when I see it, and not one second sooner.

@ EP:
I know that your favorites are SMRs. Apart from the two that have been built from Russians and employed in two ice-breakers, there are, to my knowledge, none in operation. Besides that, they are "dirty" as most everything that is produced from Russians.
NIF has incorporated the same principle as used in HB11 but instead of using Hydrogen they have resorted to Deuterium and Tritium. Fusion is easier to achieve with these elements than with Hydrogen. NIF expects to commercialize their variant in two to three years. The disadvantage of using heavy or super heavy Hydrogen is the resulting radioactive waste. However this waste has a rather short life. I would prefer such a solution any time to fission products The best of all would be success of HB11 fusion.

I know that your favorites are SMRs.

Nonsense.  My "favorites" are anything we can build in quantity, and soon.  This mainly means they're not dependent upon a tiny number of huge forges and other scarce resources.  Moltex, Thorcon, Natrium and Elysium are not SMRs like NuScale, but I wish them well anyway.  I have no idea who's going to win and where, but it looks like Nuscale has the inside track in the USA.  Natrium looks more like a dark horse to me.


Apart from the two that have been built from Russians and employed in two ice-breakers, there are, to my knowledge, none in operation.

There are quite a few world-wide, mostly in nuclear-powered seagoing vessels.  However, I'm reliably informed that those designs mostly don't have the full-power endurance to be the basis of long-lived electric power plants.  The Akademik Lomonosov must be an exception.