The Frontier supercomputer at the Department of Energy’s Oak Ridge National Laboratory has earned the top ranking as the world’s fastest on the 59th TOP500 list, with 1.1 exaflops of performance. The system is the first to achieve an unprecedented level of computing performance known as exascale, a threshold of a quintillion calculations per second. 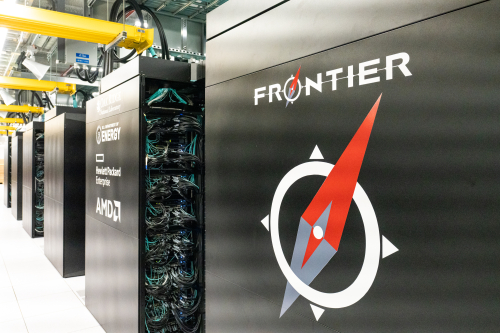 The Frontier supercomputer’s exascale performance is enabled by some of the world’s most advanced pieces of technology from HPE and AMD: 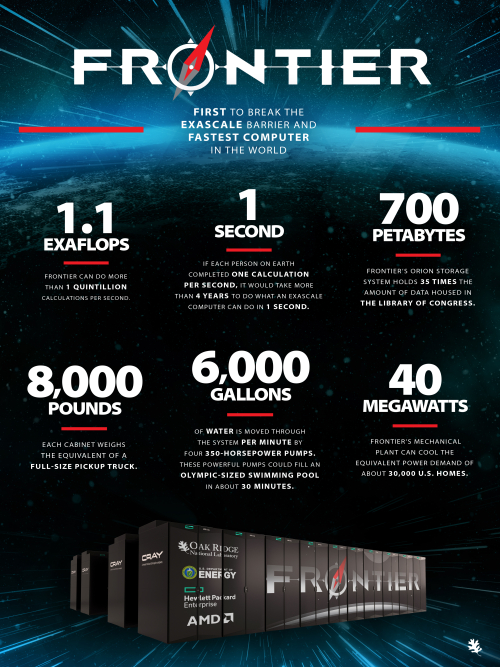 Rankings were announced at the International Supercomputing Conference 2022 in Hamburg, Germany. Frontier’s speeds surpassed those of any other supercomputer in the world, including ORNL’s Summit, which is also housed at ORNL’s Oak Ridge Leadership Computing Facility, a DOE Office of Science user facility.

Frontier, a HPE Cray EX supercomputer, also claimed the number one spot on the Green500 list, which rates energy use and efficiency by commercially available supercomputing systems, with 62.68 gigaflops performance per watt. Frontier rounded out the twice-yearly rankings with the top spot in a newer category, mixed-precision computing, that rates performance in formats commonly used for artificial intelligence, with a performance of 6.88 exaflops.

The work to deliver, install and test Frontier began during the COVID-19 pandemic, as shutdowns around the world strained international supply chains. More than 100 members of a public-private team worked around the clock, from sourcing millions of components to ensuring deliveries of system parts on deadline to carefully installing and testing 74 HPE Cray EX supercomputer cabinets, which include more than 9,400 AMD-powered nodes and 90 miles of networking cables.

Frontier’s overall performance of 1.1 exaflops translates to more than one quintillion floating point operations per second, or flops, as measured by the High-Performance Linpack Benchmark test. Each flop represents a possible calculation, such as addition, subtraction, multiplication or division.

Frontier’s early performance on the Linpack benchmark amounts to more than seven times that of Summit at 148.6 petaflops. Summit continues as an impressive, highly ranked workhorse machine for open science, listed at number four on the TOP500.

Frontier’s mixed-precision computing performance clocked in at roughly 6.88 exaflops, or more than 6.8 quintillion flops per second, as measured by the High-Performance Linpack-Accelerator Introspection, or HPL-AI, test. The HPL-AI test measures calculation speeds in the computing formats typically used by the machine-learning methods that drive advances in artificial intelligence.

Detailed simulations relied on by traditional HPC users to model such phenomena as cancer cells, supernovas, the coronavirus or the atomic structure of elements require 64-bit precision, a computationally demanding form of computing accuracy. Machine-learning algorithms typically require much less precision—sometimes as little as 32-, 24- or 16-bit accuracy—and can take advantage of special hardware in the graphic processing units, or GPUs, relied on by machines like Frontier to reach even faster speeds.

ORNL and its partners continue to execute the bring-up of Frontier on schedule. Next steps include continued testing and validation of the system, which remains on track for final acceptance and early science access later in 2022 and open for full science at the beginning of 2023.