BMW has unveiled its new BMW X1. At launch in October 2022, there will initially be a choice of two gasoline and two diesel engines from the BMW Group’s new modular generation of Efficient Dynamics engines. These will link up with a seven-speed Steptronic transmission with double clutch as standard, and their drive power will be channelled to the road via either the front wheels or the BMW xDrive intelligent all-wheel-drive system, depending on the model.

This starting quartet will immediately be followed by the all-electric BMW iX1 xDrive30 (electric power consumption, combined in the WLTP cycle: 18.4 – 17.3 kWh/100 km; estimates based on the car’s current development stage) as well as by a pair of plug-in hybrid models and another two conventionally powered variants with 48V mild hybrid technology. 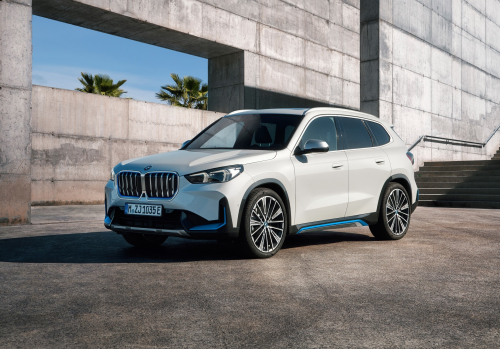 The new BMW X1 will be built at BMW Group Plant Regensburg, where models with combustion engines, plug-in hybrid systems and all-electric drive will all roll off a single assembly line for the first time.

The BMW iX1 xDrive30 is the first all-wheel-drive electric car introduced by the brand in the premium compact segment. Two highly integrated drive units at the front and rear axles deliver a combined output of 230 kW/313 hp (taking the temporary boost effect into account), and post overall torque of 494 N·m (364 lb-ft). The electric all-wheel-drive system ensures supreme traction and directional stability in all situations. The BMW iX1 xDrive30 completes the 0 to 100 km/h (62 mph) sprint in 5.7 seconds. 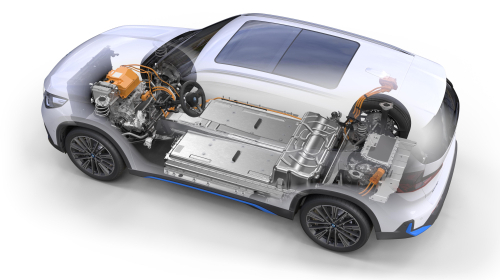 The fifth-generation BMW eDrive technology additionally comprises the car’s highly efficient charging technology, including the improved charging software also found in the BMW i7, and a high-voltage battery positioned flat within the vehicle’s underbody. The high energy density battery gives the car a range of 413 – 438 kilometers (257 – 272 miles). (The figures relating to output, performance, energy consumption and range for the BMW iX1 xDrive30 are predicted values based on the car’s current stage of development.)

Plug-in hybrid models with increased electric range, gasoline and diesel engines with 48V mild hybrid technology. Fifth-generation BMW eDrive technology is also employed in the plug-in hybrid variants of the new BMW X1, which means significant advances over the preceding generation in terms of sporting prowess, efficiency and charging capacity. There has also been an increase in electric range.

Second-generation 48V mild hybrid technology with an electric motor integrated into the seven-speed Steptronic transmission is on hand to help boost both efficiency and power delivery in the two most powerful engines.

Near-actuator wheel slip limitation is fitted as standard in the new BMW X1, benefiting both traction and directional stability. Other new features include the integrated braking system and the extra, lift-related damping at the front axle. The optional adaptive M suspension features frequency-selective damping, sport steering and a 15-millimeter drop in ride height.

Systems for automated driving and parking. The technological advances made in the new BMW X1 compared with the outgoing model are also evident in the far greater variety of automated driving and parking systems available to use. Standard features include Cruise Control with brake function and the front-collision warning system, which is now also capable of detecting oncoming traffic when turning left (in countries where vehicles drive on the right) and pedestrians and cyclists when turning right. The Parking Assistant including Reversing Assist Camera and Reversing Assistant also forms part of the standard equipment roster.

The list of optional features, meanwhile, includes the Steering and Lane Control Assistant, Active Cruise Control with Stop&Go function, Active Navigation, exit warning function and BMW Head-Up Display, as well as the Surround View, Remote 3D View, BMW Drive Recorder and Remote Theft Recorder functions. Existing functions can be upgraded by means of the Remote Software Upgrades facility, which also makes it possible to add new functions (availability depends on the hardware fitted in the vehicle and the market conditions).