Toyota is expanding its 2023 Corolla lineup with four new Hybrid grades, including a more powerful hybrid system and available all-wheel drive. Toyota is also expanding its Corolla Cross family with the first hybrid model in that lineup.

Instead of AWD provided by transfer gears and a driveshaft to the rear wheels, Corolla’s new Electronic On-Demand All-Wheel Drive employs a separate rear-mounted electric motor to power the rear wheels when needed.

The system works seamlessly and transparently, preemptively distributing driving force to the rear wheels to help suppress front wheel slip during off-the-line starts. It also engages the rear motor in response to slippage at the front wheels and enhances cornering agility by helping to reduce understeer. The driver can view torque distribution on the Multi-information Display and audio system screen.

A compact high-output/low-loss drive motor has been newly developed for the transaxle/motor, which includes a redesigned magnet and electromagnetic steel plate configuration with two additional magnets for increased output. The new hybrid system also includes a newly developed lithium-ion battery that’s now located under the rear seat to lower the center of gravity and maximize trunk cargo capacity.

This high-strength platform is fortified through the use of ultra-high-tensile steel as well as the application of structural adhesive technology for enhanced body rigidity and passenger security. 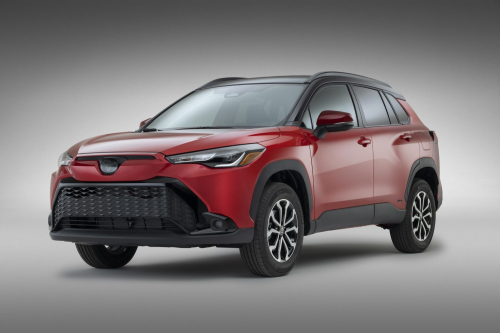 With 194 horsepower and an 8.0 second 0-60 time, the Corolla Cross Hybrid has a manufacturer-estimated 37 combined miles per gallon for all grades. The 2023 Corolla Cross Hybrid will be available in three new grades: S, SE and XSE, as well as the familiar LE and XLE grades.