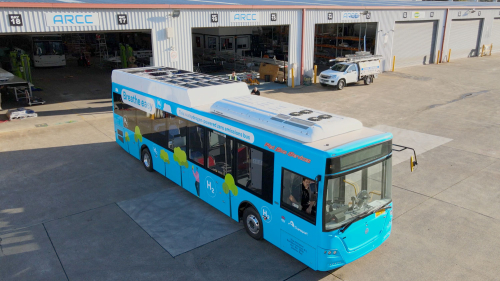 Loop Energy’s T600 (60 kW) fuel cell module will be integrated into ARCC’s 12.5-meter Viking Hydrolight city bus model, which aims to be in service by 2023.

Designed for city bus operations in Australia, it will be built around ARCC’s distinctive lightweight chassis, which uses an aluminum frame and is primarily bolted, with less than 5% weld parts.

Combined with the increased fuel efficiency of Loop Energy’s eFlow technology, the lighter bus weight will reduce fuel consumption while allowing for greater passenger capacity compared to other electric buses on the market.

ARCC currently has a hydrogen-electric bus participating in a New South Wales State Government led trial to help inform how hydrogen technologies may factor in a broader rollout of zero-emissions buses. In 2019, Australia launched its National Hydrogen Strategy, underpinning its intent to become a major global player in hydrogen by 2030. The New South Wales and Queensland governments have committed to scaling the production of Green Hydrogen and launching over 10,000 hydrogen-electric vehicles collectively.

Loop Energy and ARCC aim to unveil the first Fuel Cell bus at the Australia Bus & Coach Expo in October 2022. The partnership will also see the two companies develop strategies to position Viking Hydrolight buses as a sustainable and efficient solution for transit operators in Australia and worldwide.