Plug Power Inc. will build a 35-tons-per-day green hydrogen generation plant at Port of Antwerp-Bruges in the heart of Europe. Plug signed a 30-year concession agreement to build the plant at the Belgian port, the second-largest in Europe.

Plug plans to erect a 100-megawatt green hydrogen plant, using its own electrolyzer and liquefaction technology, on 28 acres of land leased under the agreement. Plug will produce up to 12,500 tons per year of liquid and gaseous green hydrogen for the European market.

Port of Antwerp-Bruges sits in a strategic location in Europe. At the center of the largest chemical industry cluster in Europe and close to the North Sea, it provides transportation connections to Germany, Belgium, Netherlands, UK, and France. It is less than an hour’s drive to Brussels, the capital of Europe.

The port area is also one of the busiest logistics areas in Europe, handling annually 289 million tons of maritime freight, 24 million tons of rail freight, and 108.5 million tons of barge freight. Sixty percent of Europe’s purchasing power is located within 300 miles.

Port of Antwerp-Bruges, set to become a major hydrogen hub for Europe, has plans to be a lighthouse port for climate-neutral infrastructure.

The site location provides the opportunity for a ready supply of electricity from on-site and site-adjacent wind turbines generating dozens of megawatts, with an electric interconnection point less than a mile away. In addition, the site offers water, road, rail, and pipeline access for the delivery of green hydrogen to customers. An open-access hydrogen pipeline will be built along the site, and Plug has signed a contract with Fluxys to engage in a feasibility study for enabling a connection to the pipeline, which will be part of a European open-access hydrogen backbone.

Plug will build in the port’s NextGen District, an area dedicated to companies supporting the circular economy. Leveraging the cluster being assembled in the NextGen district, Plug is exploring partnerships to complete the circular use of wastewater expelled during the production of green hydrogen. 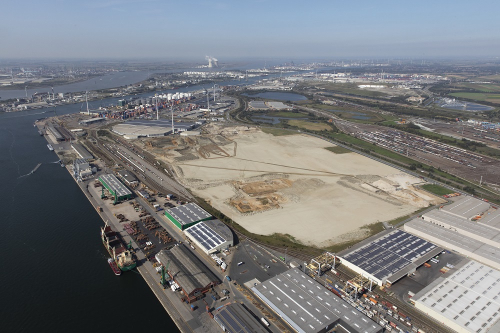 More than 1,500 acres of covered warehousing at Port of Antwerp-Bruges supports heavy manufacturing industries. Plug will contribute to decarbonizing the logistics flows of the port, with material handling solutions, fuel cell vans through HYVIA—a joint venture between Plug and Renault—and stationary power solutions for shore power.

North Sea countries are major producers of wind power with more than 15 gigawatts (GW) of installed capacity. They have committed to grow capacity to 65 GW by 2030 and 150 GW by 2050, as part of a recent cooperation agreement signed by Belgium, Germany, Denmark, and the Netherlands. The European Union recently launched a $315-billion REPowerEU initiative to support the shift from Russian fossil fuels to renewable energy including green hydrogen.

Hydrogen projects only happen in europe and asia and i live in canada.