FEV, a leading service provider in vehicle and propulsion system development and testing, has evaluated the performance of the Transient Plasma Systems Inc. (TPS) nanosecond pulsed power ignition system (earlier post) on the current Toyota 2.5-liter, direct and port fueled injection, inline 4-cylinder gasoline engine commonly used in the Camry line of vehicles. The “Dynamic Force Engine” achieves one of the world’s best thermal efficiencies of 40% in gasoline powered vehicles according to Toyota. 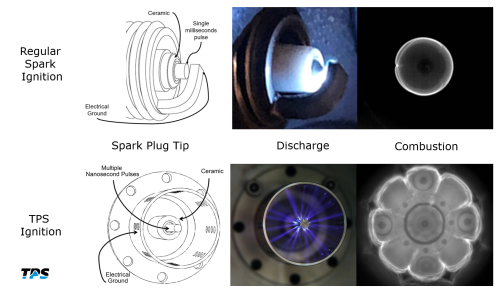 Results indicate a brake-specific fuel consumption (BSFC) benefit of up to 6% with minor calibration changes, which include a multi-pulse ignition strategy, increased external EGR, and optimized spark timing. With the TPS ignition system, there was no degradation of combustion with increased EGR.

The TPS Ignition System allowed for stable operation beyond an air fuel ratio of 30 (λ>2), with the potential of enabling ultra-lean burn strategies such as the one found in the Mazda Skyactiv-X.

The combustion strategies enabled by the TPS Ignition System could result in fuel economy gains greater than 20% across a drive cycle, as illustrated by the simulation results in the 2020 report by Sandia National Labs to US DOE.

The world cannot transition to widespread electric vehicle adoption overnight, despite the ambition and commitments of automakers and legislators. Hundreds of millions of internal combustion engine vehicles are projected to be sold round the globe in the next decade. There is an immediate need to produce cleaner gasoline engine vehicles to meet the global CO2 target and automakers recognize advanced ignition systems as a necessity to achieve the last great CO2 reduction. These test results, along with our significant progress in reducing cost, size and energy consumption of the TPS ignition system, demonstrate its nearing commercialization.

TPS Transient Plasma Ignition System is a new tool for high-dilute combustion strategies, reduced NOx emissions, and efficient engine modes in challenging situations. The low-energy/high-power ignition system increases efficiency in a variety of combustion engine designs, including gasoline-powered, hybrid, and natural-gas-powered vehicles as well as green fuels such as hydrogen.

Unlike competing systems that involve costly engine redesigns and displacement of current engine architecture, the TPS Transient Plasma Ignition System works alongside existing engine designs and efficiency techniques such as exhaust gas recirculation (EGR), gasoline direct injection (GDI), turbocharging and e-boost, significantly enhancing performance with a simple solution. TPS, as a technology development firm, has taken the technology to the point of a design that has the potential to meet size, cost, and performance metrics of gasoline and natural gas engine OEMs.

Interesting - my view is that ICEs are not dead (only resting) and could be very useful for range extenders and also just ICEs.
Nice to see this level of efficiency without using diesel fuel.
Also, could be used with Ch4 for lower co2 levels.

It would be interesting to see some actual data, e.g. EGR tolerance and how the combustion behaves near the lean limit. An issue, which appears to have been beyond the scope of this study, is that emission control is not trivial on a lean-burn engine.

I had a acquaintance (a friend of a good friend) that was working on plasma ignition about 50 years ago. He unfortunately died fairly young and I am not sure what happened to his research work. Anyway, this is not a new idea. I have a reasonable respect for FEV but this is just working on the final gasp of the IC engine. 20 years ago, this might have made a difference.

Plasma ignition, laser ignition, fart ignition ......all these innovations? are for the birds. Fact is, that anyone with a bit of common sense has already provided a coffin for the ICE. RIP

More useful if it can be retrofitted to existing vehicles to cut fuel use before they get replaced by EVs.