A team from Washington State University (WSU) and the Gas Technology Institute have used an ethanol and water mixture and a small amount of electricity in an electrochemical conversion system to produce pure compressed hydrogen. Such a system would enable hydrogen to be made on-site at fueling stations, with only the ethanol solution needing to be transported, rather than high-pressure hydrogen gas.

A paper on the work is published in the journal Applied Catalysis A.

The Caustic Aqueous Phase Electrochemical Reforming (CAPER) process can convert aqueous-phase ethanol to high-pressure and high-purity hydrogen (H2) at lower cell operating temperatures and voltages than traditional methods. Additionally, any carbon dioxide (CO2) produced by the ethanol electrochemical oxidation is captured by the caustic electrolyte solution. Without using a membrane, the only gas-phase species is H2. 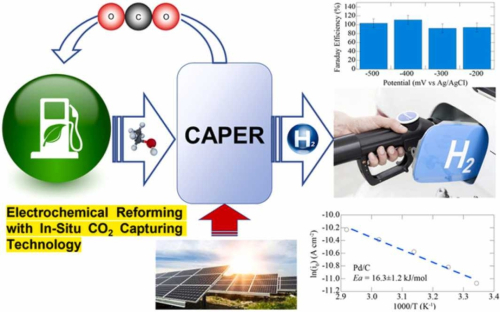 This is a new way of thinking about how to produce hydrogen gas. If there are enough resources, I think it has a really good chance of making a big impact on the hydrogen economy in the near future.

We’re already using ethanol-containing gasoline at every gas station. You can imagine that an ethanol water mixture can be easily delivered to a local gas station using our existing infrastructure, and then using our technology, you can produce hydrogen that is ready to pump into a hydrogen fuel cell car. We don’t need to worry about hydrogen storage or transportation at all.

The WSU researchers created a conversion system with an anode and a cathode. When they put a small amount of electricity into the ethanol and water mixture with a catalyst, they were able to electrochemically produce pure compressed hydrogen. Carbon dioxide from the reaction is captured in a liquid form.

The electrochemical system the team developed uses less than half the electricity of pure water splitting, another method that researchers have studied for de-carbonized hydrogen production. Instead of working hard to compress the hydrogen gas later in the process, the researchers used less energy by instead compressing the liquid ethanol mixture, thereby directly producing an already compressed hydrogen gas.

The presence of the ethanol in water changes the chemistry. We can actually do our reaction at a much lower electrical voltage than is typically needed for pure water electrolysis.

The system also doesn’t require an expensive membrane as do other water splitting methods. The resulting hydrogen from the electrochemical reaction is then ready for use.

The researchers are working to scale up the technology and operate it in a continuous manner. They also are working to make use of the carbon dioxide captured in the liquid.

The work was funded by the Gas Technology Institute and the US Department of Energy’s RAPID Manufacturing Institute.

We need a hydrogen infrastructure and hydrogen cars and trucks for the climate and especially to decrease fuel costs that are destroying the economy with inflation everywhere. Hurry-up.

Ethanol can be made from ethylene and water

Ethanol is produced from a mixture of yeast, water starch, etc, it is dramatically cheaper and lower carbon when it doesn’t have to be dehydrated. Ethanol for gasoline has to be 200 proof. If they could simply filter and ship it would be ideal from a production standpoint.

How much water is ideal for the mix to have? Do other solutions (methanol water, butanol water, etc) impact water splitting the same way?

What catalyst are they using, how long does it last? Ethanol water proportions @ start and finish? How much mass of H2 can be taken from a gal of the mix before the reaction efficiently falls off back to just standard electrolysis? At what rate can H2 be liberated from each gal of mix for instance?

Compressing a liquid is much simpler and energy efficient than the same pressure on a gas. So here again this has a big double win potential.

The problem with this during a western US megadrought is the ethanol produced from corn is already net positive carbon emissions compared to just using more fossil oil ... Plus all the other H2 powered transport inefficiencies...