A team at Chalmers University in Sweden has analyzed the results of the integration of a chemical looping gasification (CLG) process with a Fischer-Tropsch synthesis (FTS) process and found that this biomass-to-liquids process can produce FT crude with net-negative CO2 emissions. An open-access paper on the study appears in the ACS journal energy & fuels. 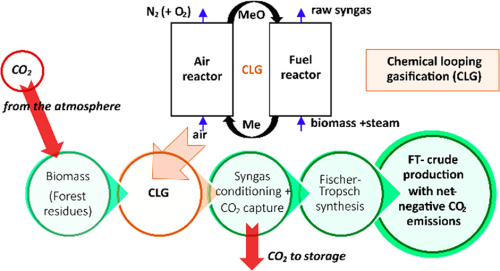 The CLG process is based on chemical looping combustion (CLC), in which gaseous and solid fuels are combusted in an interconnected circulating fluid bed reactor (CFB), assisted with oxygen carriers (OCs) in the form of metal oxide particles, as the bed material in the fuel reactor (FR). The OC is reduced in the FR and, thereby provides elemental oxygen required for combustion. In a separate reactor (the air reactor, AR) the reduced OC is oxidized with air.

Direct fuel and air mixing is avoided by this measure of cyclic oxidation–reduction of the metal oxide particles in two separate reactors, which results in an oxygen-depleted air stream from the AR and a flue gas concentrated with CO2 from the FR. CLC is estimated to reduce costs associated with carbon capture and storage mainly by avoiding monetary and energy costs related to gas separation. Net-negative emissions could be achieved through CLC of biomass with CO2 storage. Kumar et al.

CLG resembles indirect gasification in an interconnected circulating fluidized bed reactor, where instead of inert bed material, a solid-oxygen carrier, such as mineral ores rich in iron or manganese oxides, is used. The oxygen carrier particles undergo oxidation and reduction in the air reactor and fuel reactor, respectively, thereby providing heat and oxygen for gasification.

The Chalmers researchers used data from CLG experiments performed with steel converter slag as the oxygen carrier and investigated its potential when integrated with different downstream gas cleaning trains and the subsequent fuel synthesis process with the primary objective of quantifying and evaluating the performance of the integrated CLG–FT process plant.

Among the results of the modeling was the prediction of syngas with a high energy content of 12 MJ/Nm3 (lower heating value basis) with a cold gas efficiency of 73%. CO2/CO ratios, higher than indirect biomass gasification, were also predicted in the raw syngas produced; thus, there exists an opportunity to capture biogenic CO2 with a relatively lower energy penalty in the subsequent gas cleaning stages.

A high H2/CO ratio (>1.6) in the raw syngas provides the added advantage of eliminating the costly gas conditioning stage prior to the downstream FTS process.

FT crude obtained from the model mainly comprises naphtha (∼53%), followed by FT diesel (∼31%) and waxes (∼10%). Of the total carbon fed to the process, roughly 64% is captured for storage, corresponding to a CO2 capture capacity of approximately 180 kt of CO2/year.

This is still an autothermal process which loses much, if not most, of both the the carbon and energy in the biomass feed.  We need better approaches.